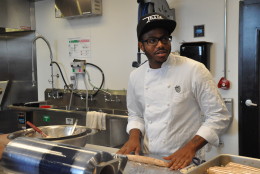 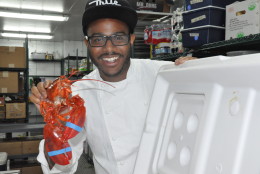 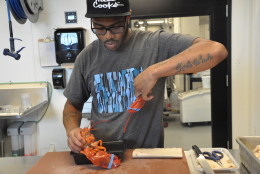 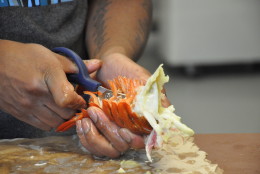 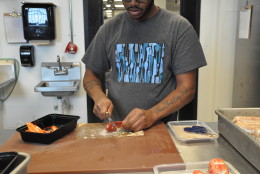 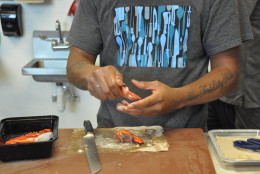 WASHINGTON — Kwame Onwuachi just got back from a food-focused trip to Maine, where he traveled around The Pine Tree State and ate nothing but lobster.

“We went on the boats, we caught lobster, I went to the facilities where they break down lobster, we went to some of the most historic lobster shacks in Maine, and I was pretty much lobstered-out for three days,” said Onwuachi, a former “Top Chef” contestant and chef at the forthcoming restaurant The Shaw Bijou.

It was all in the name of research for his new partnership with the Maine Lobster Marketing Collaborative, which he joined to learn more about the beloved crustacean. And it was one that put his health on the line — well, kind of.

“You want to know a fun fact? I’m allergic to lobster,” Onwuachi said after going through the details of his trip.

“Well, really only raw lobster. So if you go to a fine dining restaurant and they just butter poach it, that will give me an allergic reaction.”

It’s a good thing that not all lobster sends Onwuachi running for Benadryl. The chef has big plans to include it on the menu at his 28-seat fine-dining restaurant, located in the heart of D.C.’s Shaw neighborhood.

For his fisherman’s pie, he’s whipping up a caramelized lobster béchamel and serving it over turbot. And at the bar, guests can order a lobster pot-pie, made with caviar and truffles.

As delicious as those dishes sound, lobster doesn’t have to be fancy or complicated. In fact, the favorite summertime food is simple to prepare. We recently caught up with Onwuachi to talk about the best, no-fuss ways to cook lobster at home this season.

One of the easiest ways to prepare lobster is to boil it and serve it with butter.

Start by bringing a pot of water to a rolling boil. Then, drop in your live lobster.

“The coldness of the lobster is going to stop the boiling. It’s going to draw energy from that,” Onwuachi said.

Keep an eye on the clock — you only want your lobster to simmer in the hot water for about 12 to 16 minutes. Onwuachi says any longer and your meat could be tough and rubbery to eat.

Once it’s done, you can crack it open and eat it right away or shock it in an ice bath and pick the meat for a lobster roll.

A lot of people eat their lobster with drawn butter — “Which is pretty much a clarified butter, where you cook the butter until the milk solids either sink to the bottom and caramelize and then the water from the butter comes out, so you’re left with just the fat,” Onwuachi explained.

But he likes those milk solids, so he makes a beurre monté to eat with lobster by slowly melting butter with a little bit of water — “So you’re continuing the emulsification process so it’s more of a sauce than the clarified butter,” Onwuachi said.

If you’re opting for the lobster roll, mix the picked lobster meat with a little bit of mayonnaise and serve it on a buttered bun.

Making lobster for pastas and casseroles

If the final destination for your lobster is a pasta dish or casserole, and not a bowl of butter, Onwuachi wants you to know about a preparation method that chefs and cooks in the restaurant industry use all the time.

Instead of throwing the whole lobster in a pot of boiling water, start by separating the lobster claws from the tail.

“Because it’s just like chicken, you know, where the white meat cooks differently from the dark meat. The claws are a lot thinner and the tails are a lot bigger,” Onwuachi said.

“And this releases the meat from the shell. And then you shock the lobster and then you can break it and take it out of the shell,” Onwuachi said.

Don’t sneak a taste just yet. Technically, the meat is still a touch raw, but it’s ready to be incorporated into the other components of your dish.

“So then you can fold it into a pasta and saute it and do things like that,” Onwuachi said.

If the hard shell keeps you from cooking lobster, Onwuachi has some tips to help you get cracking.

He says the tail usually cracks with a good squeeze. Then, using a pair of scissors, cut along the inside of the tail — “Kind of the translucent part of it,” Onwuachi said — and peel the meat out.

For the claws, your best tool is a bread knife. Onwuachi breaks the claws off, then taps them with a bread knife and turns the knife.

“It just cracks it right off and then you can literally slip the claw [meat] right out,” he said.

Feeling inspired? You can find a number of recipes and prep tips on the Maine Lobster Marketing Collaborative website.