A crash that happened last month in Springfield, Virginia, turned fatal this week the victim — a two-year-old child who battled injuries for 13 days before dying Wednesday night.

The crash happened around 10:40 a.m. on July 29 at the intersection of Backlick and Barta roads. Police said a 2007 Lincoln Town Car — whose driver had an unrestrained child in the car — was traveling northbound on Backlick Road when it drifted into the median, striking a traffic signal pole, before continuing into oncoming traffic.

There was no car seat in the vehicle, and police said the child had been riding in the driver’s lap.

The crash also sent the driver, as well as the person driving the F-350 pickup, to the hospital, with injuries considered life-threatening. Both drivers have since been released.

Fairfax County Police continue to investigate all of the circumstances leading up to the crash.

While speed and alcohol have been ruled out as factors, investigators are still determining whether any drugs were involved. Regardless, police said the driver is likely to face charges. By state law, children are supposed to be in a child safety seat.

At this point, police have not released the names or any identifying information of anyone involved.

The child was the county’s seventh non-pedestrian-related fatality this year. 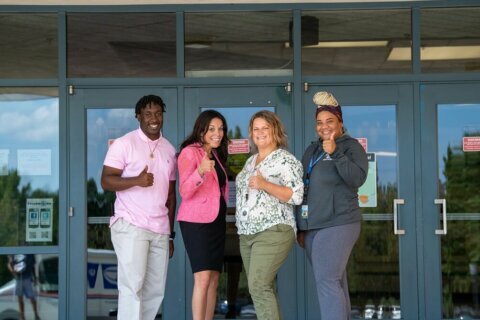