After weeks of study, fearless elementary students in Va. get to know cicadas 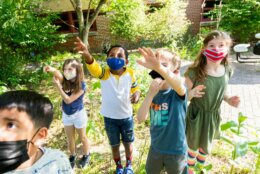 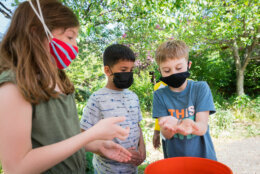 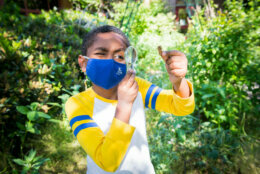 At long last, the cicadas are here, and students at Belvedere Elementary School in Falls Church, Virginia, couldn’t be happier.

They’ve been studying the noisy little critters for weeks, and now that they’ve arrived, they don’t fear them – they welcome them.

Some say they tickle. Some say they look like bumble bees. Others say they’re itty-bitty insects that have a really good grip when their crawling on skin.

“Can I hold it? Does it hurt? What shall we name it?” are some of the questions teachers said students have been asking.

Mostly, the third- and fourth-grade kids at Belvedere said they’re harmless. They even liken the red-eyed bugs to pets.

“Hello little friend,” said Emma Lyttle. “I think we will call you Grippy because your legs are gripping to my skin.”

“Well, their wings, they look like plastic. And their legs are kind of like a spider. It’s actually a really good grip, even though you put them upside down, they still walk up.“

Fourth grader Parks Underdown said his biggest scientific discovery was the difference between the males and females.

“Typically, I would think the males would be bigger than the females, like in most species, but in this species, the females are larger than the males. And you can tell by the way their butt looks,” Underdown said.

Educators at Belvedere have been planning this coming-out moment for some time.

“We started learning about cicadas in the classroom,” said Andrea Auerbach, an environmental educator at Belvedere.

Teaching students, she said, started with two basic questions about the long-awaited emergence of the cicadas: “What do you know, and what do you wonder?”

“We took the questions, and then we did frequent question-and-answer [sessions], to try to address some of the questions that the kids had. We also watched a video to see the cicadas up close before they arrived, so students would have an idea about what to expect when they came out.”

In another part of the school, librarian Marcie Atkins began working on cicada-themed stories. Other activities were held both indoors and outside to pique the students’ interest.

As the temperature of the in-ground thermometers grew, so did the students’ anticipation.

During an outdoor trip, a group of third graders peered through magnifying glasses.

Some of the first reactions were shrieks of terror and excitement.

“I love it when the student’s reaction goes from being scared and then ‘wow’ — even being able to hold them,” Auerbach said.

The exoskeletons, which are the shells the cicadas shed, were among the biggest draws. They will even turn into a math project.

“Exoskeletons!” yelled Eliam Adane, as he discovered abandoned shells the creatures had crawled from. “Ewww … I found one over here too,” said Maxwell Findler.

Auerbach said they’ll collect the shells in a bucket until they have enough to guess how many there are in the container.

“We are collecting the exoskeletons to touch and feel. It’s unique to see the exoskeletons all over the place and how they cling to leaves,” Auerbach said. “It’s kind of interesting to see how many we can find, since there is a cicada that comes out of each of the exoskeletons. I hope that we’ll be able to guess how many cicadas are in the container. That’ll give students an opportunity to use some math skills to make an estimate.”

Other cicada-related activities at Belvedere include a contest to find the rare blue or white-eyed species. Staff handed out a “Wanted Dead of Alive: Blue or white eyed cicadas” poster. Though rare, they are hoping the kids will seek them out.

And yet another contest is “cicada bingo,” in which students mark off completed activities like “saw a cicada nymph,” “saw a cicada flying” and even “ate a cooked cicada.”

Last week, in the courtyard, third-graders swapped stories about their observations both at school and in their neighborhoods at home.

“I’m finding them all over the place,” said Emma Lyttle. “Me and my brother found eight this morning. It was like they were having a cicada party!”

Auerbach said the project will wrap up in about six weeks. “They are not out for that long,” she said. “We’ll have them now until school ends.”

The environmental teacher hopes to have more classes outside to meet the cicadas, because not everyone has had a chance. The experience of being able to “see, hear and touch up close” cicadas once as a child, she said, is a rare opportunity.

During the last emergence in 2004, Auerbach said, her memories were not so pleasant.

“I was incredibly freaked out by the cicadas,” she recalled. “I remember them being everywhere, sweeping them off the sidewalk, and having them fly into me. I vowed that next time around I would be taking an extended vacation.”

“But now, as an environmental educator, I wasn’t about to leave.”