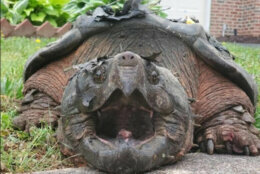 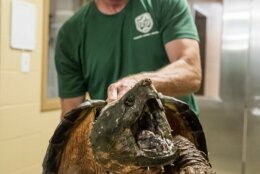 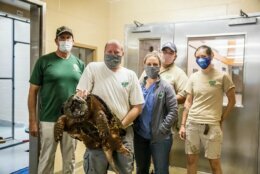 A large turtle was reported crossing a road in Fairfax County, Virginia, and police got a snappy surprise.

Recently, our Animal Protection Police received a call about a large turtle in a residential area of Alexandria. Much to their surprise, it was a 65 lb alligator snapping turtle! Learn more at: https://t.co/RtHz4aJ5qP #FCPD pic.twitter.com/qgYFRmUyMS

Animal Protection Police received a call about the animal crossing the road in the Alexandria suburb of the county. It turned out to be a 65-pound alligator snapping turtle.

Police captured it and took it to the Fairfax County Animal Shelter, where a biologist from the Virginia Department of Game and Inland Fisheries, or VDGIF, picked it up.

Police believe the animal was released into the wild.

The alligator snapping turtle can reach more 200 pounds, and at 65 pounds, VDGIF said the animal, who has been named Lord Fairfax, was a youngster. It is now at the Virginia Zoo in Norfolk, where it will hopefully be part of a new exhibit.

“Since this turtle was most likely a captive-bred animal, it can never be released into the wild,” VDGIF said.

The alligator snapping turtle (Macrochelys temminckii) is native to river drainages that flow in the Gulf of Mexico, east to Georgia and the panhandle of Florida and westward to east Texas.

The Chelydra serpentina is a species of “common” snapping turtle native to Virginia.

Turtles have been popular pets for several years. However, some well-meaning pet owners have been releasing these turtles into the wild, VDGIF said.

The sale of turtles less than 4 inches in shell length was banned in 1975 by the Food and Drug Administration in 1975 due to risk of salmonella poisoning in children.

Although the threat to humans was minimal, the alligator snapping turtle would have most likely experienced a slow death as a result of either freezing or starvation, VDGIF said.
“If you are considering a turtle as a pet, please do your homework first and find out what it takes to provide adequate care for a lifelong commitment,” VDGIF said in a statement. “Many species of turtle can live a minimum of 50 years and others more than 100.”