WASHINGTON — Calling it a “shocking” case, Fairfax County major crimes detectives said they need to identify more than 60 women and teenagers who were unknowingly recorded in more than 100 mall dressing rooms during the weeks leading up to Christmas.

Investigators are now asking the public to check the dates and locations where investigators know women were caught on a suspect’s recording equipment set up at stores in Fair Oaks Mall and Tysons Corner Center between Dec. 15 and 24.

There are also other dressing room locations pulled from images and video that have yet to be identified, said Major Ed O’Carroll with Fairfax County police.

On Dec. 24, Mumtaz Rauf of Alexandria, Virginia, was arrested at Fair Oaks Mall after a teenager spotted a camera in her dressing room at Forever 21 and alerted employees who flagged officers.

Rauf was found with a pinhole camera, black tape, and a battery-powered Bluetooth transmitter.

Officers suspected he was using those items to remotely gather video and pictures from various fitting rooms. He was charged with the unlawful filming of a minor.

“By all indications, he was close by — in that next stall,” O’Carroll said.

So far, investigators said the following locations and approximate time frames are when Rauf was recording:

There is also a time period from 9:15 p.m. to 10 p.m. on Dec. 22 during which investigators believe he was possibly at the H&M and Old Navy at Tysons Corner Center.

After searching the 39-year-old’s home, Quinn said officers found an additional 13 devices, including tablets, phones, laptops and thumb drives that they are sifting through for evidence.

“We are aware of other videos where he walked around and filmed videos of women in public places,” Quinn said.

Virginia law states the offense against an adult is a misdemeanor but the unlawful filming of a child is a felony.

Rauf is being held without bond. 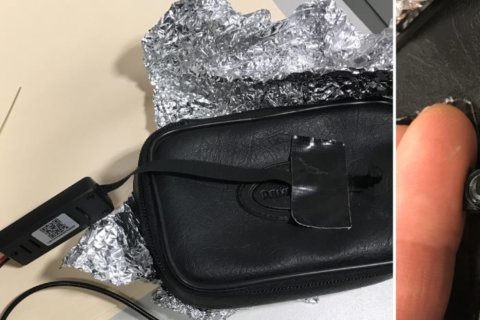