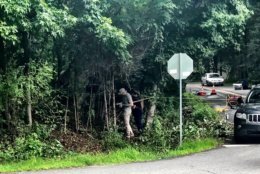 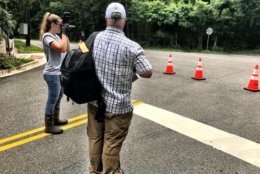 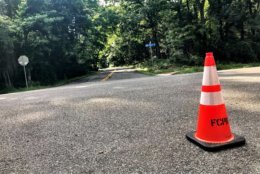 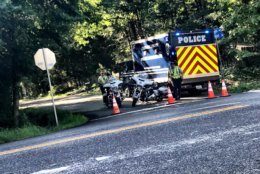 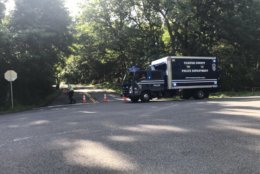 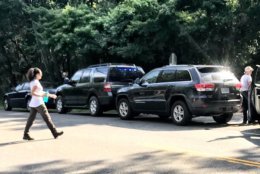 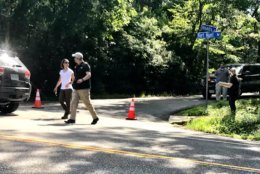 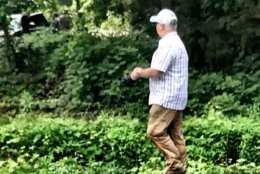 FBI investigators began working near the intersection of Fort Hunt Road and Alexandria Avenue by 9 a.m., as part of their investigation into the Nov. 17, 2017 shooting. By 5 p.m. they had left the scene.

Ghaisar, a 25-year-old accountant from McLean, had led Park Police on a several mile chase down George Washington Parkway after being involved in a fender-bender north of Old Town Alexandria.

During Thursday’s re-creation, the FBI maneuvered a Jeep Cherokee, similar to Ghaisar’s, into position where he stopped on Alexandria Avenue, at the intersection with Fort Hunt Road.

Park Police, the FBI and D.C. prosecutors have never said why they believe officers opened fire on Ghaisar.

FBI agents used machetes and rakes to clear away brush on the passenger side of Ghaisar’s Jeep, which was parked with its windows open for this reenactment.

Agents brought several metal detectors into the cleared-away area, searching for any evidence that might still be at the location.

An agent used string running through the Jeep’s open window into the cleared area, likely recreating the trajectory of bullets passing through Ghaisar’s vehicle.

His family has said Ghaisar was unarmed, but investigators have never specified whether or not they believe he had a weapon.

Asked if agents were searching for something that Ghaisar threw from his Jeep, the FBI declined comment.

A spokesman for the U.S. Attorney for the District of Columbia wouldn’t discuss what investigators were seeking.

At approximately 7:30 p.m. on the night of the shooting, Ghaisar was driving southbound on George Washington Parkway, north of Old Town Alexandria, when he was rear-ended by an Uber driver.

According to the Park Police report of the incident, Ghaisar left the scene. Minutes later Park Police spotted Ghaisar’s Jeep and attempted to pull him over.

A Fairfax County police officer joined in the pursuit, while recording the chase on his dashcam video camera.

Twice, Park Police pulled Ghaisar over, and approached with guns drawn. In both instances, Ghaisar drove away.

At the intersection of Fort Hunt Road and Alexandria Avenue, Ghaisar stopped for a third time. As officers approached again, with their weapons pointed toward Ghaisar’s car, his Jeep moved forward.

Officers fired nine times into the Jeep, according to what is seen and heard on the video. His family said Ghaisar was hit four times in the head, and died 10 days later.

To avoid conflicts of interest during the investigation of the officer-involved shooting, the FBI and D.C. prosecutors have taken the case, but have provided no substantive updates, citing the ongoing investigation.

The two officers involved in the shooting have not been identified, but remain on administrative leave, according to Park Police public information officer Sgt. James Dingeldein.

Several politicians, including Fairfax County Board of Supervisors Chair Sharon Bulova and Representative Don Beyer, have criticized the pace of the FBI’s investigation, and have sought answers on behalf of Ghaisar’s family and supporters.

“My heart goes out to the friends and family of Bijan Ghaisar,” Bulova said in a statement released to WTOP. “It has been 7 months since Bijan was shot and killed by the U.S. Park Police, and still, silence continues.”

“Withholding basic facts and information for this long is painful and wrong,” Bulova said. “I hope that disclosure on the part of the U.S. Park Police and the FBI will soon bring closure to this tragic case.”

Here’s where police have been searching: