Fairfax County police have started wearing body cameras, and though there are many benefits for officers, some are still getting accustomed to the change in protocol.
Listen now to WTOP News WTOP.com | Alexa | Google Home | WTOP App | 103.5 FM

WASHINGTON — Police in Fairfax County, Virginia, have started wearing body cameras; and though there are many benefits for officers, some are still getting accustomed to the change in protocol.

“It is new terrain,” said Maj. Christian Quinn, who heads the department’s Cyber and Forensics Bureau.

One police officer was wearing one of the department’s first body cameras when he confronted a driver involved in a single-vehicle crash on Braddock Road two weeks ago. He can be heard on the footage saying: “Do you have a driver’s license? It’s a valid driver’s license? … In what state? Maryland? Keep your hands out of your pockets for me, OK?”

The driver ended up getting arrested for a DUI.

Since the first camera’s debut, there have been lots of other responses captured that are already proving useful to police.

“It’s very interesting to see the very first person who gets there, in our officers who respond, to see the scene from that perspective,” said Quinn. “This is the first time we’ve really had the ability, for all intents and purposes, to recreate that, based on the different angles and view you have at the moment.”

Quinn thinks the cameras will prove useful for many reasons, one of which is being able to decipher physical evidence, from unrelated material.

“A lot of times, there are forensically things introduced to a scene because somebody tracks footprints in, or someone leaves medical waste that was part of the intervention to help a victim and you’re looking at how did this get here or whose prints are these,” he said.

Quinn also believes that the cameras can provide teachable moments to officers.

One advantage the body cameras bring is officers can learn how to respond better during tactical response to dangerous situations by re-watching footage.

Or, they can learn a more mundane lesson, which could still be life-or-death for an officer.

“I realized, I, at one point, used my right hand, which I never do, because my preference is to use my non-dominant hand to hand documents and things like that, just for various safety reasons,” Quinn said.

“I caught myself using my dominant hand. And I have no memory of that, but watching the video, I realize I could have done better there,” he said.

Quinn acknowledged that many officers are still getting used to the cameras.

While some officers have become more reserved and tense with the cameras on, others are acclimating just fine, talking and behaving as they would any other time, he said.

There is also the occasional technical hiccup. Getting acquainted with the mounts or having a camera in the midst of a tussle fall off are just some of the problems police have had, so far.

Many clips of footage only span around 10 seconds long, as officers play with the cameras. There’s also one piece of footage that runs four hours long.

“(In one piece of footage), the perspective of the camera was obviously on the floor looking up at the officers,” Quinn said. 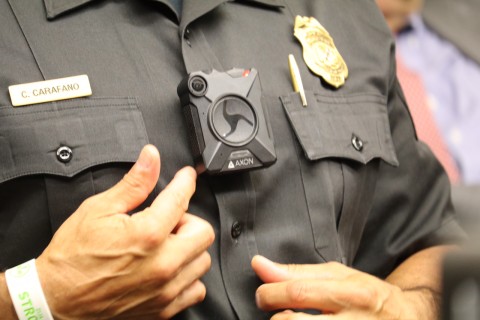