One person was killed and another hurt with life-threatening injuries after a crash on the Inner Loop of the Beltway in Springfield, Virginia, Saturday.
Listen now to WTOP News WTOP.com | Alexa | Google Home | WTOP App | 103.5 FM
(1/4) 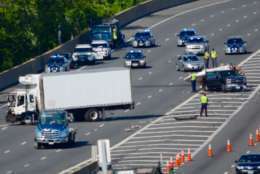 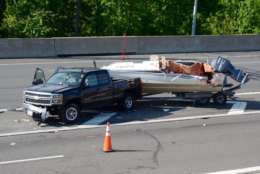 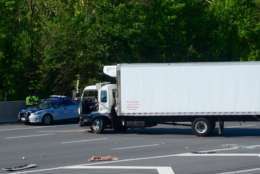 Editor’s note: This story has been updated to indicate that the boat and one of the pedestrians were struck by a box truck.

WASHINGTON — One person was killed and another hurt with life-threatening injuries after a crash on the Inner Loop of the Beltway in Springfield, Virginia, Saturday.

A spokeswoman for Virginia State police said a pickup truck that was towing a boat had pulled off into the median on westbound Interstate 495, near the portion of the Beltway known as the “mixing bowl.”

Leonard A. Schultz, 52, of Ashburn, Virginia, and Albert Schultz IV, 24, got out of the truck in order to re-secure the boat when a box truck drifted into the median, hitting the boat and one of the pedestrians. The other pedestrian was struck in the impact of the crash, according to state police.

Leonard Schultz was the football coach and a special education teacher at James Madison High School in Vienna, Virginia, from which he graduated in 1983. He took over as coach in 2011.

“As a central figure in our school and the entire community, we understand that many will be affected in some way by this tragedy,” he wrote.

“As a special education teacher and our football coach, Mr. Schultz was known to be a kind, compassionate and thoughtful person. His friendship, guidance, and leadership will be greatly missed.”

Albert Schultz IV graduated from the Vienna school in 2011. He attended the United States Naval Academy in Annapolis, Maryland.

The driver of the box truck, Carlos Alberto Garcia, 42, of Woodbridge, Virginia, was not hurt.

State police said the driver of the pickup, Edward Schultz, who is the father of Albert and the brother of Leonard, did not get out of the vehicle and was not injured in the crash.

The crash happened at around 3:45 p.m., shutting down lanes between Van Dorn Street and the Springfield exchange near the southbound Interstate 95 exit for several hours as police worked the scene. The roadway reopened at around 8 p.m.