Police said a Herndon man who was shot and killed by officers following a hostage standoff and house fire Monday afternoon got into an argument with his girlfriend that set off the dangerous chain of events.
Listen now to WTOP News WTOP.com | Alexa | Google Home | WTOP App | 103.5 FM

WASHINGTON — Police said a Herndon man who was shot and killed by officers following a hostage standoff and house fire Monday afternoon got into an argument with his girlfriend that set off the dangerous chain of events.

Mohammad Azim Doudzai, 32, was shot outside the Covered Wagon Lane town house where he lived after police had attempted to disarm him with rubber bullets and a stun gun.

Doudzai got into an argument with his girlfriend at the townhouse before shooting and injuring two of his own brothers, police said. The brothers left to seek treatment at the hospital.

Doudzai took a third person hostage, a 29-year-old roommate not related to the family, and set the home ablaze. Police said he continued to fire a handgun during the ordeal, which prevented firefighters from battling the fire.

A team of officers approached the door, and a knife-wielding Doudzai came out and was shot by a 16-year veteran of the police department. The responding officers went into the house and rescued the hostage.

Doudzai was taken to the hospital, where he died.

The officer who shot Doudzai has been placed on administrative leave while the investigation is ongoing.

Detectives recovered a gun and a knife from the home and are processing other evidence. Investigators said they are working to develop a precise sequence of events.

Anyone with information about the case is asked to contact the Fairfax County police at 703-691-2131.

Editor’s note: This story has been updated to clarify the relationship between the wounded brothers and the alleged shooter Police said the brothers who were shot were related to Mohammad Azim Doudzai. 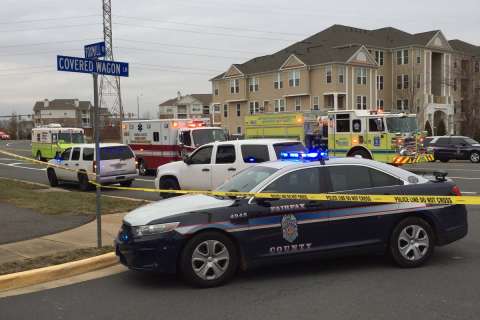