Our long national nightmare of COVID is far from over, but our national pastime is back.
Listen now to WTOP News WTOP.com | Alexa | Google Home | WTOP App | 103.5 FM 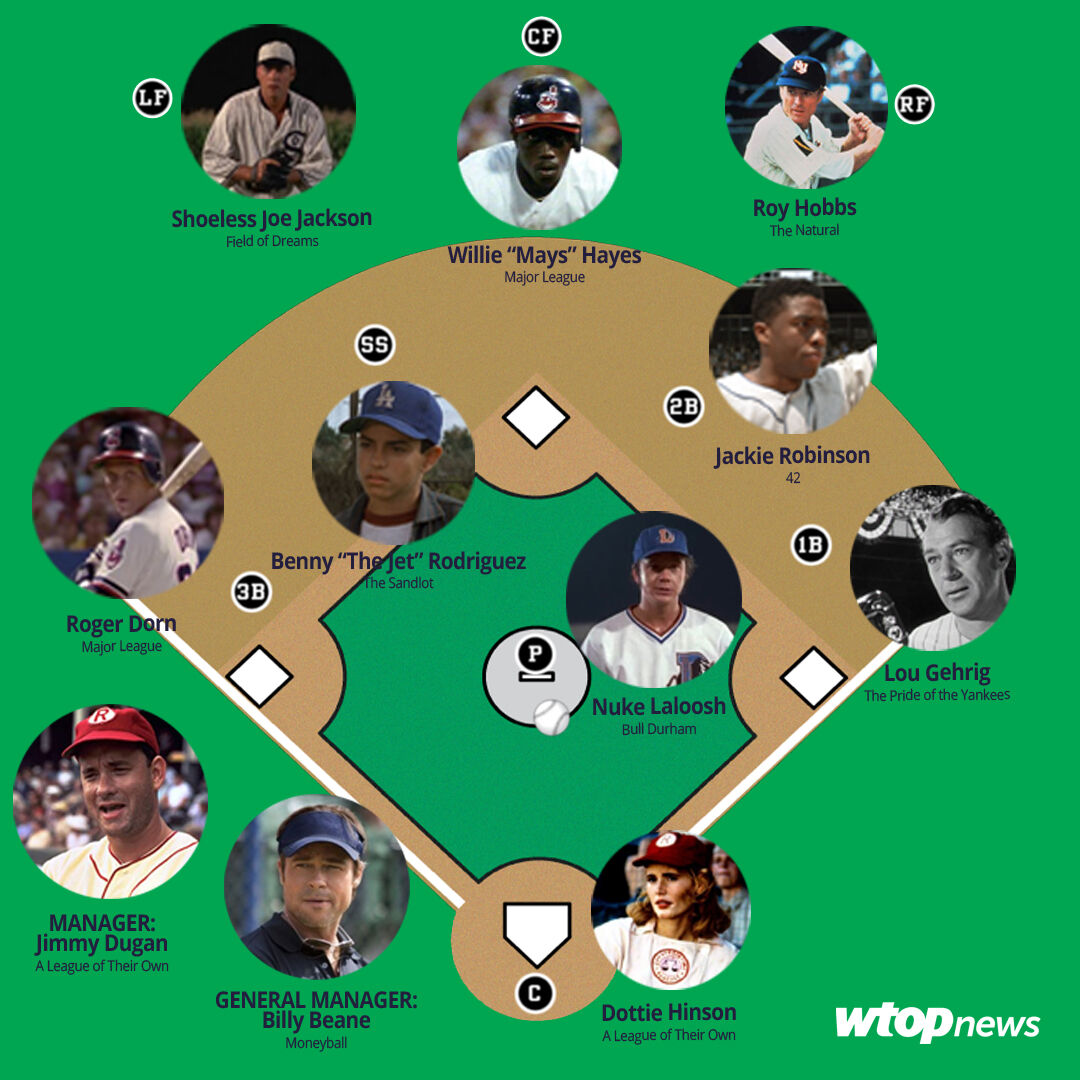 After months without sports during the pandemic, our national pastime is finally back.

Thursday is Opening Day for Major League Baseball, as the Washington Nationals host the New York Yankees before the Baltimore Orioles visit the Boston Red Sox on Friday.

Brad Pitt’s portrayal of real-life Oakland A’s general manager Billy Beane was an instant classic thanks to Jonah Hill’s support and a script by Aaron Sorkin and Steve Zaillian.

Manager: Jimmy Dugan (“A League of Their Own”)

So what if he’s drunk on the job? Tom Hanks delivered an iconic performance coaching the all-women Rockford Peaches and teaching us all that “there’s no crying in baseball.”

“Now we’re rolling boys!” The late James Gammon was absolutely hilarious spitting sarcastic zingers under his mustache: “He may run like Mays, but he hits like sh**.”

There would be no “Mighty Ducks” without “The Bad News Bears,” as Walter Matthau coached a little league team in a role that was later reprised by Billy Bob Thornton.

If our team ever gets down on its luck, we’ll turn to George Knox (Danny Glover) for his belief in miracles, joining the fans to wave his arms like wings for an angelic assist.

A year before “Goodfellas,” Ray Liotta delivered a haunting performance as the ghost of Shoeless Joe Jackson, purging his gambling sins by playing ball in an Iowa cornfield.

Before “Blade,” Wesley Snipes gave us Willie “Mays” Hayes, robbing home runs and stealing bases. In case of injury, Snipes is his own backup as Bobby Rayburn in “The Fan.” Third on the depth chart: Anthony Perkins’ Jimmy Piersall in “Fear Strikes Out.”

Robert Redford may have struck out The Whammer as a pitcher, but he later moved to the outfield for the New York Knights. He deserves a roster spot for his clutch heroics with his mythical bat Wonderboy, exploding the stadium lights to Thomas Newman’s music.

First Base: Lou Gehrig (“The Pride of the Yankees”)

“Today I consider myself the luckiest man on the face of the earth.” Gary Cooper was iconic as The Iron Horse struck down by the illness that would ultimately bear his name, Lou Gehrig’s Disease, today known as ALS. “Is it three strikes, doc?” “It’s three strikes.”

Next to Gary Cooper’s Lou Gehrig we have Chadwick Boseman’s Jackie Robinson, who endured vicious racism to break baseball’s color barrier in 1947. It was the first of several Black biopics from James Brown (“Get On Up”) to Thurgood Marshall (“Marshall”) that ultimately landed Boseman his career role as the superhero T’Challa in “Black Panther.”

Benny “The Jet” Rodriguez became the stuff of childhood legend when he outran The Beast in his PF Flyers to retrieve a ball signed by Babe Ruth. If The Beast somehow catches him, our backup short stop is John Cusack’s Buck Weaver (“Eight Men Out”), the only player in the 1919 Chicago Black Sox scandal not to take the gamblers’ money.

Sure, he became a whiner in “Major League II,” but Roger Dorn began as a solid third baseman played by Corbin Bernsen at the height of his TV fame on “L.A. Law.” In the end, Dorn proved he could set aside off-the-field jealousy for the good of the team.

Catcher: Dottie Hinson (“A League of Their Own”)

The second starter in our pitching rotation is child prodigy Amanda Whurtlizer, who struck out the boys in an awesome turn by Tatum O’Neal after her Oscar for “Paper Moon.”

The third starter in our pitching rotation is Thomas Ian Nicholas’ little leaguer Henry Rowengartner, who breaks his arm to gain a magical ability to throw “high stinky cheese” fastballs under the tutelage of Gary Busey’s seasoned veteran Chet Steadman.

In between “Brian’s Song” and “The Empire Strikes Back,” Billy Dee Williams starred as Negro League pitcher Bingo Long with James Earl Jones as his catcher and Richard Pryor as his right fielder. Talk about hilarious conversations in the dugout.

The fifth and final starter in our pitching rotation is Brendan Fraser’s pitching prospect Steve Nebraska, discovered by Yankees scout Al Percolo in a witty turn by Albert Brooks.

Our bullpen has to include Tony Danza’s Mel Clark, who goes from washed-up has-been to overdue champion. It can’t hurt to have a reliever with a little help from above.

Before his iconic role as Edward R. Murrow in “Good Night and Good Luck,” David Strathairn played pitcher Eddie Cicotte in “Eight Men Out,” but is he on the up and up?

Relief Pitcher #3: Billy Chapel (“For the Love of the Game”)

After a pair of classics in “Bull Durham” and “Field of Dreams,” Kevin Costner returned to the genre in this tale of Detroit Tigers pitcher Billy Chapel, who debates giving up his sports passion of 19 years when he learns his girlfriend is moving to London for a job.

Dennis Quaid inspired as Texas chemistry teacher Jim Morris, who agrees to try out for the major leagues if his high school team makes the playoffs. Sure enough, he makes the Tampa Bay Rays in an inspirational underdog tale that deserves a spot on our roster.

Before becoming a tabloid maniac, Charlie Sheen was an ’80s superstar from “Platoon” to “Wall Street.” His best role was Rick “Wild Thing” Vaughn, donning black-rimmed glasses and a zig-zag haircut to run onto the field for a “Wild Thing” entrance in the 9th.

Calling balls and strikes behind the plate, we have Leslie Nielsen’s Frank Drebin for his comic relief and sweet dance moves. He just might prevent a Reggie Jackson assassin.

Flying around the stands to inspire the fans is head angel Christopher Lloyd, who uses the American League’s “AL” logo on a ballcap to come up with his human alias “Al.”

If there’s one medical professional you want on your staff it’s Burt Lancaster, who gave up his dream of playing in order to save a child from choking on a ballpark hotdog.

In the booth, Bob Uecker’s Harry Doyle will do the play by play with signature calls like, “Juuuuust a bit outside!” Just don’t let his assistant take over: “Fly ball. Caught.”

Finally, our club must include James Earl Jones’ sports writer Terence Mann: “America has rolled by like an army of steamrollers. It has been erased like a blackboard, rebuilt and erased again. But baseball has marked the time. This field, this game, it’s a part of our past, Ray. It reminds of us of all that once was good and it could be again.”