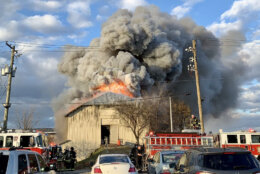 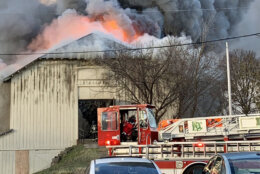 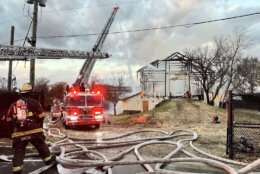 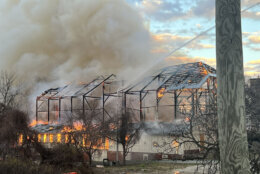 A large fire in a vacant Southeast D.C. barn sent plumes of smoke high into the air across the nation’s capital on Saturday afternoon.

D.C. Fire and EMS units were called to a vacant two-story structure on the campus of St. Elizabeths, a psychiatric hospital, around 3:45 p.m. Saturday.

Crews arrived to find much of the barn engulfed in flames. A towering column of smoke was visible from across the Potomac River in Arlington, Virginia, before firefighters brought the blaze under control.

Fire officials reported no injuries. A second alarm was called to bring in additional firefighting resources. On Twitter, the fire department said the barn was in imminent danger of collapse late Saturday due to the extensive damage it sustained.

WTOP’s news partner NBC Washington reported D.C. Fire and EMS chief John Donnelly expects the entire barn to have collapsed by the time the fire department is through with its work.

Images shared on Twitter showed the barn’s interior frame and support beams smoldering, with much of the structure a burnt ruin.

Wetting down pockets of fire. pic.twitter.com/aD7aoW1Mgg

Archival images from the Library of Congress describe the wood-framed structure as a cow barn, one of several buildings on a portion of St. Elizabeths’ campus used for agriculture in the late 19th century. According to LOC, the barn that burned down Saturday was built in the 1880s “to accommodate the hospital’s herd of about 100 dairy cattle and their associated dairying operations.”

A 2020 report from the National Capital Planning Commission counted the barn, a nearby horse stable and staff residence as “among the oldest existing buildings on the St. Elizabeths East Campus.”

WTOP has reached to the D.C. Department of Behavioral Health, the agency tasked with overseeing operations at St. Elizabeths, for comment.

As many as 100 firefighters responded to the scene. Anticipating a collapse, the fire department worked from the outside for several hours to quell the blaze and remained on the scene past nightfall, knocking down hot spots.

In a Saturday night briefing, Donnelly said that although firefighters had the flames largely controlled, he expects it to take all of Saturday night before the fire is completely put out.

Officials do not yet know what caused the fire.