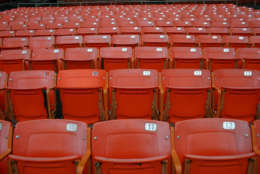 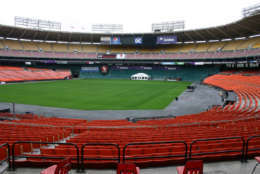 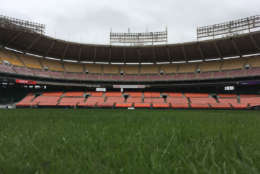 If you have fond memories of the stands rocking at RFK Stadium and would like to own a piece of history, take a seat.

Events DC announced Thursday it is selling off RFK’s iconic orange seats in advance of the demolition of the 61-year-old sports stadium that once hosted the Washington football team, soccer team D.C. United, and two Major League Baseball teams.

The seats are being sold on Stadium Seat Depot, starting Thursday. For now, sales are limited to the orange wooden and plastic seats from the stadium’s lower bowl. Metal turnstiles are also for sale.

If you want to own a piece of the stadium and aren’t local to the D.C. region, however, beware: The seats must be picked up in-person between Dec. 16 and Dec. 18 from RFK Stadium itself.

Events DC said the sale is part of a “Farewell RFK” effort meant to “celebrate and honor the legacy of D.C.’s most iconic sports and concert venue,” before the stadium is demolished.

“The Robert F. Kennedy Memorial Stadium holds special memories for many of us in the community,” said Events DC Board Chairman Max Brown in a statement. “We watched D.C.’s football team win division championships. We saw baseball return to the nation’s capital here. We also saw our favorite bands like the Grateful Dead and Traffic, among others.”

He said the stadium is “woven into the fabric” of the District.

So how much will one of those orange seats cost you? A single wooden stadium seat goes for $399 plus 6% D.C. sales tax and a 3% processing fee. A double set will run you $499.99 plus taxes and fees.

Plastic seats, both single and double set, will run you $50 cheaper. A metal turnstile costs $599.99 plus taxes and fees.

All seats come with a certificate of authenticity and are sold “as is” — and will likely show signs of wear consistent with an outdoor stadium, the website says.

The burgundy plastic, gold plastic and gold wooden seats from the upper bowl of the stadium will be part of a second sale expected in early 2023.

The stadium, originally called the District of Columbia Stadium, was renamed in 1969 for senator and presidential candidate Robert F. Kennedy, who was assassinated the year before.

The land the stadium sits on is owned by the federal government and is under lease to D.C. through 2036. Mayor Muriel Bowser has proposed spending $60 million to build a new sports complex on the site.