DC envisions new sportsplex at RFK Stadium site, with or without NFL football

It started with athletic fields on the north end of the RFK Stadium complex, and now D.C. leaders are envisioning a new indoor sports complex on what is currently 190 acres of asphalt and a dingy RFK Stadium.
Listen now to WTOP News WTOP.com | Alexa | Google Home | WTOP App | 103.5 FM
(1/3) 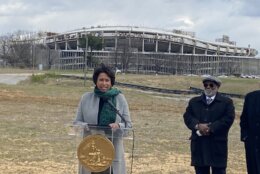 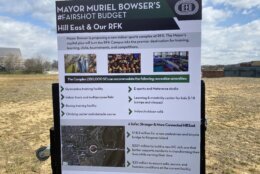 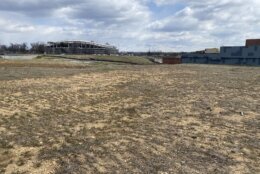 It started with athletic fields on the north end of the RFK Stadium complex, and now D.C. leaders are envisioning a new indoor sports complex on what is currently 190 acres of asphalt and a dingy RFK Stadium.

But a lot of it hinges on D.C. finally acquiring the land from the federal government — something the city has spent years trying to do without much success.

Touting her new budget proposal in the Hill East neighborhood with the stadium in the backdrop, at one point Mayor Muriel Bowser turned around and pointed at the stadium, which, from a distance, had visible signs of peeling paint and years of neglect.

“‘Do you want the only memorial to RFK in the District to look like this?'” was the question Bowser said she put forward to a member of Congress.

She blamed the National Park Service and Congress for the current state of repairs, even as the city makes plans to eventually demolish the structure.

Under the terms of the lease D.C. has with the federal government, which runs until 2036, the land can be used for sports and recreational purposes. A new NFL stadium would fit the bill.

But until the federal government goes ahead and turns control of the site back to the city — the goal of negotiations the city has spent years involved in — it’s moving ahead with plans for a new indoor sportsplex, too.

“This $60 million investment that’s included in my budget proposal to the council will also create something that the District is in much need of,” Bowser said.

The facility would then be able to host “indoor track and gymnastics and swimming and other sports and recreation activities that currently our kids are going outside of the District to participate in,” Bowser continued.

“We have some of the best, most competitive boxing programs and cheer programs in the nation,” said Delano Hunter, the director of the DC Parks and Recreation Department. “Our athletes are often ranked nationally, they compete in international competition, and they always have to travel.

“We never have an opportunity to host because we just don’t have the facilities to support it. It has been a glaring weakness in our inventory.”

Naturally, the discussion kept going back to the Washington Commanders, which used to play at RFK Stadium and is looking for a new home. Bowser was pressed on the matter, and at times her vision for the site seemed to match what Commanders owner Dan Snyder seems to be looking for.

“What we know is with 190 acres it will be a mix of uses,” Bowser said. “Long gone will be the days of having a stadium surrounded by asphalt. It will include housing. It will include other commercial development. Parks, recreation,” she said.

But Bowser also said the city has plans for the site with and without NFL football, and that the city isn’t just going to wait around. And while there would be strong neighborhood opposition to seeing a new stadium built there, it’s something Bowser says she’d still like to see happen.

But pressed even more, Bowser also vowed there won’t be a bidding war with Maryland or Virginia.

“I think that big cities have their teams,” she said. “There’s a lot of interest around the city in having our team back. But not at any price.”