D.C. police have made arrests in connection to a shooting that killed a 15-year-old in Northeast last month.
Listen now to WTOP News WTOP.com | Alexa | Google Home | WTOP App | 103.5 FM

D.C. police have made arrests in connection to a shooting that killed a 15-year-old in Northeast last month.

Andre Robertson Jr., of Northeast D.C., was shot and killed while sitting on a porch near Kelly Miller Middle and Aiton Elementary schools after 3:30 p.m. on Oct. 13.

His father was also killed in a shooting in the same neighborhood on Oct. 1, 2021.

On Tuesday, police charged a 13-year-old boy with first-degree murder while armed, according to a news release.

Previously, on Friday, D.C. police arrested a 15-year-old and charged him with first-degree murder while armed, a police news release said.

Police said that a metallic-colored sedan drove up, and three suspects got out, shooting the teen several times. The suspects got back in the car and fled, Sixth District Cmdr. Darnel Robinson said in a news conference after the shooting.

Police said they found the teenage Robertson unconscious and not breathing. He was pronounced dead at the hospital.

The case remains under investigation. D.C. police is offering a reward of up to $25,000 to anyone who provides information that leads to the arrest and conviction of the person or persons responsible for each homicide committed in D.C.

Anyone with information about this case is asked to call the police at 202-727-9099. Additionally, anonymous information may be submitted to the department’s test tip line by sending a text message to 50411. 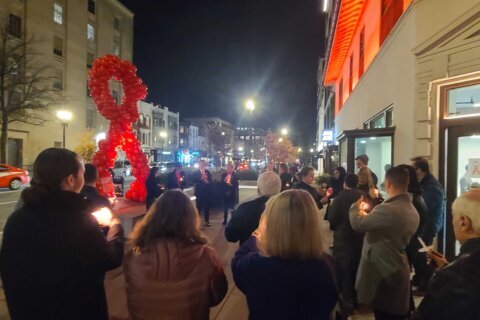