Political horse-trading, an underfunded rush job and unintended consequences — the establishment of Washington, D.C., and its designation as the nation's capital was a preview of how things would go ever since.
Listen now to WTOP News WTOP.com | Alexa | Google Home | WTOP App | 103.5 FM

Saturday marks the anniversary of the establishment of D.C. and its designation as the nation’s capital, and like any big-ticket deal in Washington ever since, the process involved a lot of haggling, and the role of the federal government was a hot topic. And, like anything that happened before the American Civil War, slavery was used as a bargaining chip.

Adam Rothman, a professor at Georgetown University, called the signing of the Residence Act (or, “An Act for Establishing the Temporary and Permanent Seat of the Government of the United States,” if you’re fancy) on July 16, 1790, “an important step toward the construction of a permanent capital for the United States in the early republic.”

And in an era where travel was very much not at jet speed and communication was very much not instantaneous, setting the location of the nation’s capital settled “one of the central political questions of the era.”

The federal government had been seated in several places, including New York, Philadelphia, Baltimore and Annapolis. That wasn’t working out very well, Rothman said, most notably in 1783, when Congress was “basically kicked out of Philadelphia” after a band of soldiers protested for back pay — and Pennsylvania didn’t exactly knock themselves out sending a militia to help out.

“That kind of freaked out members of the Continental Congress,” Rothman said, “and they realized how vulnerable they were to local pressures. And so that was the impetus for creating a federal district that would insulate the national government from, let’s say, the influence of a particular state, or locality.”

OK, so they needed their own place. But where should it be?

Well, that gets into the power politics of the day, Rothman said, with the Federalist faction led by President George Washington, featuring Treasury Secretary Alexander Hamilton, advocating a strong central government for the new nation, and the Republicans, led by Secretary of State Thomas Jefferson, who advocated for a limited national government.

The immediate issue, Rothman said, were the debts the states incurred in the fighting of the American Revolution. The northern Hamiltonian states, which still owed money, wanted the federal government to swallow the debts up and pay them off; the southern Jeffersonian states, thanks in large part to slave labor, had paid their debtors off, so they weren’t interested in that.

There was something they did want, though — for the nation’s capital to be located in (more or less) the South. Since the capital wouldn’t be in New York or another Northern center, “they basically pull political power away from financial power. And that has a big limiting effect on the national government,” Rothman said.

And of course, there was the issue of slavery. “They thought it was a lot safer to have the national capital not be in a place with a rising anti-slavery movement,” Rothman said. “The question of whether or not Washington, D.C., will be located in a slave society, or in a society moving toward a different kind of system, is a really important one.”

That was an opening for a compromise — as long as you weren’t too hung up on slavery, of course, which the powers that be weren’t.

So over dinner at Jefferson’s house, (immortalized in the song “The Room Where It Happens” from the musical “Hamilton”), Hamilton, Jefferson and Rep. James Madison compromised: The national government would assume state debts, and the capital would be on the Potomac River. (This required repealing a bill already passed in Congress placing the capital on the Susquehanna River, in Pennsylvania, but they managed that.)

Thanks to its location, “Washington becomes a slave city; that is to say, a city with a pretty substantial enslaved population,” Rothman said. “And that shifts a lot over time. But it definitely shapes the pattern of development for the city.”

“D.C. emerges as a slave city in the middle of a slave society, at the same time as an anti-slavery movement emerges in the 19th-century United States,” Rothman said. “And that means that the question of slavery in the national capital will be one of the important questions that shakes up American politics before the Civil War.”

Between 20% and 30% of the population of D.C. was enslaved, Rothman said: “The elite of the city gained some of their power and prestige, not to mention their source of labor, from slavery. And by the 1820s and 1830s, D.C. becomes one of the linchpins of the domestic slave trade in the United States.”

Once the site was set, they had 10 years under the Residence Act to get the city built. (Philadelphia stood in as capital for that time.) How close did they cut it?

Georgetown and Alexandria were incorporated into the federal district (Alexandria was returned to Virginia in 1846), “but most of what is today the District of Columbia was basically farmland in the 1780s,” Rothman said. “It was not an urban space at all.”

The French American engineer Pierre L’Enfant was brought in to design the city, but his original plans — “these very elaborate renderings … with these graded streets and thoroughfares” — got pared back pretty quickly, Rothman said.

By the fall of 1800, only the President’s House; the north wing of the Capitol, where the House met, and the stretch of Pennsylvania Avenue connecting the two, were functional, the House history website says.

Rothman called the location of the capital a “fraught” location in a lot of ways — over slavery, naturally, but in economic and military terms as well.

Not even 20 years after the Residence Act was passed, the British, in the War of 1812, essentially destroyed the new capital, which was located in an area the enemy could easily control.

“There were probably lots of places that would have been more secure than the Potomac River in the 1810s,” Rothman said. “I mean, the British Navy basically had free rein in the Chesapeake during the War of 1812. And that would have been less likely if the capital had been in Philadelphia or New York.”

That inability to attract a lot of people to the “urban backwater” meant it was hard to raise much of a militia to fight off the British. In fact, the destruction was so complete, Rothman said, that D.C. got “a chance to start over and rebuild the public buildings, and essentially try again.”

Given that it sat between two slaveholding states — the Confederate state of Virginia, and Maryland, which stayed in the Union even though it maintained slavery — Rothman said, “It turns out to be a precarious location during the Civil War.”

Perhaps the most obvious example is the time President Abraham Lincoln was shot at D.C.’s Fort Stevens, still the only time in American history a U.S. president has been shot at in a war — although the fact his assassin, John Wilkes Booth, was able to hide from capture among sympathetic Confederates in Maryland and Virginia for nearly two weeks is pretty illustrative, too.

So, the conflict and horse-trading involved in the establishment of D.C. as the nation’s capital may seem depressingly familiar, but Rothman has a more hopeful take: The process, he said, “represents the ideal of Republican government, and the compromises and adjustments that are made along the way to turn ideals into reality.” 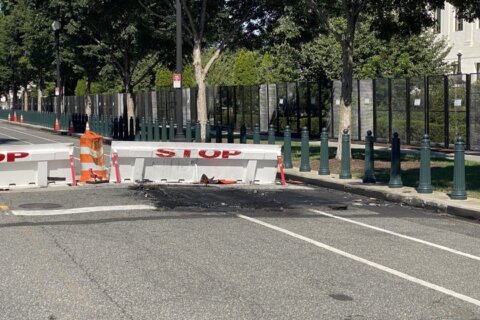 Police: Armed man crashes into barricade near US Capitol before killing himself

Back in the Day | Local News | Washington, DC News