Queen Anunay, who is a District native and graduate of Eastern High School, has been with the department for 30 years since being hired as a cadet in 1991.
Listen now to WTOP News WTOP.com | Alexa | Google Home | WTOP App | 103.5 FM
(1/4) 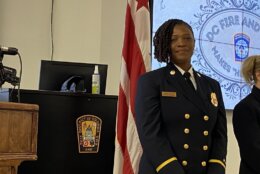 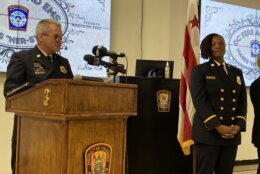 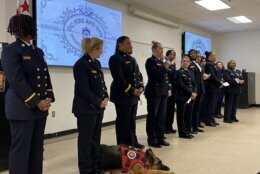 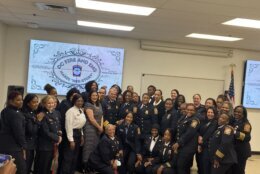 On Tuesday, D.C. Fire and EMS announced the promotion of Queen Anunay to be its first female assistant fire chief. At the event announcing the promotion, Anunay wouldn’t allow focus to remain on her.

Rather, during a ceremony at the department’s Southwest facility, the new assistant chief chose to honor both the women who came before her and those on their way to command roles.

“I hope that this accomplishment can be seen as proof that breaking barriers is possible with discipline and hard work, when given the opportunity,” Anunay said.

Anunay, who is a District native who graduated from Eastern High School, has been with the department for 30 years since being hired as a cadet in 1991.

In her new role, Anunay is in charge of the Emergency Medical Services branch of the department, which handles the most volume of any branch in the department.

“She is simply the best person for the job,” Fire Chief John Donnelly said repeatedly at the event.

In all, there were five standing ovations for Anunay and for retired Lt. Beatrice Rudder, who was the first-ever woman hired to the department in 1978.

Rudder, who Anunay said is one of her mentors, declined to speak at the event, preferring to keep the focus on women who are still serving.

“I have stood on the shoulders of many giants to reach this level, and that includes men and women of all nationalities,” said Anunay. “I will not take this appointment lightly.”

Anunay told the crowd that she may be the first woman in her role, but she won’t be the last.

“There are so many boss ladies within this agency who also deserve to be recognized during this historic event,” said Anunay.

More than a dozen other women with leadership roles in the department got a chance to speak at the event, offering their own advice or acknowledging the difficulties of being a woman in a male-dominated line of work. Some were moved to tears when they spoke.

“We have a seat at the table, but we have yet to build our voice,” Anunay said after the ceremony.

Nationally, the firefighting profession is more than 90% male. In D.C., female participation has barely cracked double digits, though the department says its most recent applicant pool was about 25% female.

Chief Donnelly said he hopes the ranks at DC Fire and EMS continue to diversify.

Anunay spoke to the challenges of making that happen.

“A lot of work to be done. A lot of convincing that we actually have something to say and contribute. It’s [a] 151-year organization who is used to hearing from men, so it’s difficult,” said Anunay.

“We need diversity in the Fire and EMS departments all across the country. So I just hope that this can serve as motivation to young women who dare to dream or dare to come into an organization such as the fire service.”

Celebrating with Anunay was her twin sister, Ursula Brimage, who was born 20 minutes after Anunay. She also serves in the department as an inspector.

“I am incredibly, incredibly proud of her,” said Brimage. “With her resilience, energy, she has got to be the most modest, selfless, determined person I’ve ever met in my life.”