Two people died in an early morning apartment fire in D.C., according to the police department. D.C. police said the department is conducting a death investigation after the bodies were pulled from the burning apartment.
Listen now to WTOP News WTOP.com | Alexa | Google Home | WTOP App | 103.5 FM
(1/8) 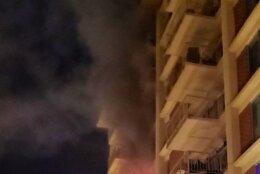 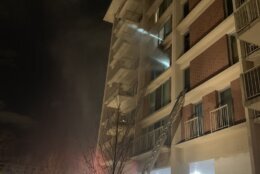 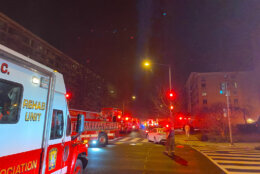 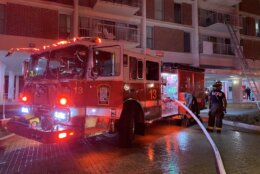 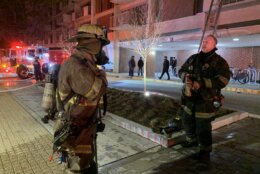 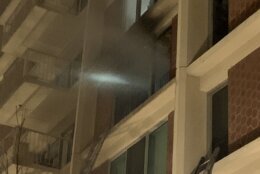 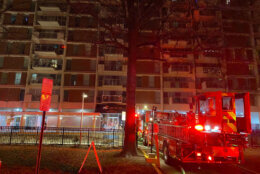 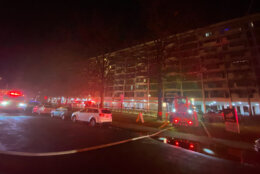 Two people died in an early morning apartment fire in D.C., according to the police department.

D.C. Fire and EMS said a man and a women were pulled from the burning apartment.

#DCsBravest are saddened to notify the community that the two victims of the 2 Alarm fire in the 300 block of G St SW are deceased. Our thoughts and prayers are with their family and friends. The victims were an adult male and female.

The fire occurred on the third floor of an eight-floor apartment building in the 300 block of G Street.

The fire department is still determining the cause of the fire.

D.C. police said the department is conducting a death investigation and that the identities of the two people are being withheld until their families can be notified.

Capitol Park Tower’s building management is providing the residents who were displaced with other housing, according to a tweet from D.C. fire.

According to D.C. Fire and EMS, firefighters responded to the two-alarm fire around 2:15 a.m.

The flames could be seen coming from a third-floor apartment, the department tweeted. Firefighters were able to contain the fire to one apartment which was engulfed in flames, according to Maggiolo.

Marvellous Mhlanga-Nyahuye said she lives about two doors down from the apartment that caught on fire. She woke up to the sound of the fire alarm and a man’s voice yelling at residents to get out.

Mhlanga-Nyahuye grabbed her passport, bag and phone and left. She said the smoke in the hallway was to her right. The man who yelled to warn his neighbors was trying to kick down the door of the apartment the smoke was coming from, she said.

“It was very emotional …” Mhlanga-Nyahuye told WTOP’s John Domen. “Although I was fearing for my own life, my biggest concern was for those that were in that apartment because they didn’t seem to be awake.”

The fire was put out in about 15 minutes, but smoke persisted, Maggiolo said. Twenty units and 100 personnel were on the scene of the fire, the department said.

Despite the fire being contained to one apartment, “heavy smoke” filled from the third-floor all of the way to the top floor of the building, according to Maggiolo.

One resident who lives on the sixth floor, Tyler, was up doing homework when he said he heard screaming from outside his window. Tyler said he saw smoke “pouring out” of the third floor.

“I decided to meet my neighbors and just started smacking on every door in the hallway,” Tyler told WTOP. “By the time we were finishing up getting everybody out, there was black smoke filling the sixth floor hallway.”

Tyler said some residents he saw evacuating had to crouch down when exiting the sixth floor around 10 minutes after the flames started.

“You couldn’t see more than 10 feet in front of you. It was hard to breathe,” Tyler said.

“I was told the hallway was full of intense heat and smoke,” Maggiolo said. “Despite that challenge they moved in, got the fire knocked down and that’s what they train for.”

Roads around the fire scene were closed for several hours.

The fire department said in a tweet their employees will return to the apartments at 1:30 p.m. on Tuesday to pass out fire prevention literature, and to replace or install outdated smoke alarms.