‘Not taking any chances’: US Capitol Police chief talks security ahead of Jan. 6 anniversary 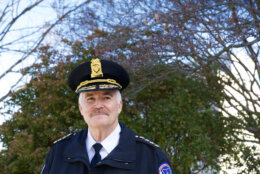 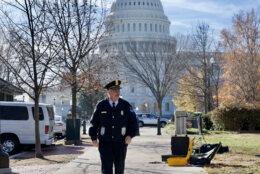 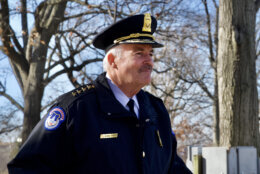 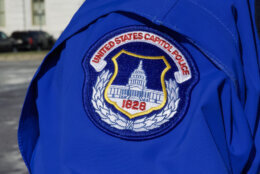 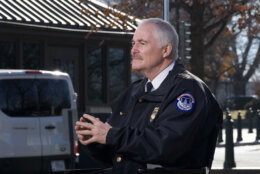 When asked about how he approaches his job, U.S. Capitol Police Chief Tom Manger said, “I’m not taking any chances.”

He’s in charge of protecting the building where members of Congress work and where tourists from all over the world gather. Now, nearly a year after the U.S. Capitol was breached by violent mobs, Manger spoke with WTOP about the attack and how he’s improving security on Capitol grounds.

He said he doesn’t think the American public or Congress could tolerate “another failure from the U.S. Capitol Police Department.”

There was a raft of reports and analyses from the likes of U.S. Senate committees, the Government Accountability Office and the USCP Office of the Inspector General, in the aftermath of the violence on Jan. 6, 2021.

“We’re going to err on the side of doing more than we perhaps need to,” Manger told WTOP, who said he goes to work every day with one goal in mind. “To make sure that everybody here is safe.”

Manger’s job is as big as the Capitol complex itself.

Unlike other federal buildings with smaller footprints and fewer entry and exit points, the Capitol is not just a single building — it’s a sprawling campus. U.S. Capitol Police officers have the job of providing security in the Capitol, House and Senate office buildings and the Library of Congress.

After Jan. 6, inquiries raised questions about the agency’s management, equipment, training and oversight.

Manger said he has no regrets about taking on the job, even though he had retired after 40 years in law enforcement when he took the job as chief of the Capitol police in July.

“The men and women here, from top to bottom, are really focused on making the organization better,” Manger said of the Capitol police force.

He had previously served as police chief for suburban police departments in Fairfax County, Virginia, and Montgomery County, Maryland.

While Manger is quick to heap praise on the people who work within the Capitol police, he also said he made clear there were deficiencies that had to be addressed.

When he signed on as chief, he said, “everybody understood there were serious and significant improvements that needed to be made, and everyone in this organization’s been working hard since then to get us to where we need to be.”

Asked about the coming anniversary of the Jan. 6 attack on the Capitol, Manger said the protests of Sept. 18 provided a chance to see how well prepared his agency was.

People supporting those arrested during the attack on the Capitol planned the September demonstrations — dubbed the “Justice for J6” rally. Prior to the event, Manger said he coordinated with police agencies from 13 different jurisdictions. He’s aware there was criticism when it turned out there appeared to be more members of the media and police than protesters.

Manger’s also confident his agency’s in a better position to secure the Capitol, thanks to a bill now signed into law by President Joe Biden that allows the Capitol police chief to call out the National Guard in an emergency.

In the past, the authority rested with the Capitol Police Board, made up of the Chief and three voting members: the sergeants-at-arms of both House and Senate, and the Architect of the Capitol.

Under the new law, Manger said, when it’s determined the National Guard is needed, “I can make the call myself. The Capitol Police Board supported that, and I certainly will be working in conjunction with them and letting them know what I’m going to do.”

But Manger added, “These are discussions that, hopefully, we’ll be having a few days ahead of time before we think we might have an issue.”

Because D.C. is not a state, D.C. Mayor Muriel Bowser doesn’t have the authority to call on the National Guard, but instead has to ask the Department of Defense to deploy troops when needed. Manger suggested that should change.

“The governor in every state has that authority, and I think the District of Columbia, being the unique jurisdiction that it is, there’s a good argument” to be made to give D.C.’s Mayor “that same capability.”

Morale After the Violence

One USCP Officer, Brian Sicknick, died following the Jan. 6 violence. Sicknick, who was sprayed with chemical irritants during the rioting, suffered two strokes within eight hours of the attacks and later died.

Four police officers — one a member of the Capitol Police, three others officers with D.C.’s police department — died by suicide in the days and months following the attack.

When Manger was asked about the state of morale among the officers on the Capitol Police force, he answered, “You can’t just make a blanket statement like morale’s bad or morale’s good, because it’s different for every officer.

“There are officers that were out there on the 6th that fought like the devil and did have some injuries but are back to work,” but Manger repeated, the events of that day “affected officers in different ways.”

Manger, who had the reputation as a cop’s cop within departments he served, said his message to the men and women of the Capitol police is simple: “We’re not going to let you down.”

Manger tells WTOP, “I’m proud to be a part of this team.”

And he’s had no misgivings about coming out of retirement to take on the job of leading the Capitol police.

“I have no regrets taking this job, I’m glad I did, I’m so proud to be a part of this agency,” Manger said. “I’m excited to see the progress that we’re making. We’ve got a roadmap for the next few years” to stay on “the track that we need to be on.”