A familiar site at the Southwest waterfront has floated away following a long dispute with D.C. and the developers of the Wharf.
Listen now to WTOP News WTOP.com | Alexa | Google Home | WTOP App | 103.5 FM
(1/5) 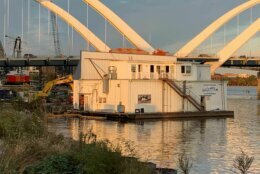 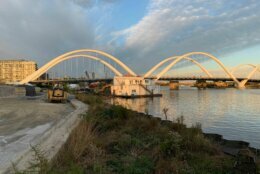 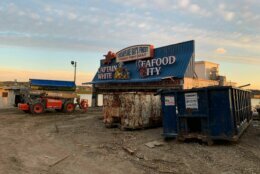 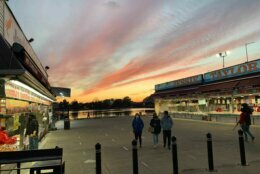 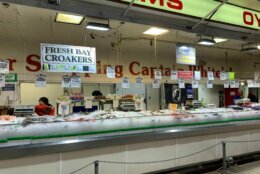 A familiar site at the Southwest waterfront has floated away following a long dispute with D.C. and the developers of the Wharf.

Captain White’s Seafood barge was seen floating away on the Washington Channel Thursday.

It’s all about family for White, who’s a third-generation operator. His nephew also works in the business. In July 2020, longtime owner Billy Ray White died in a truck crash in Fairfax County, Virginia, just days before he would have turned 65.

“This is not something that we want to do … I’ve been working here my whole life, and this is not what I plan on,” White said.

When asked why the business was leaving, White said you’d have to ask D.C. and the development nearby.

Captain White’s Seafood filed a complaint in 2015, accusing D.C. and developers Hoffman-Madison Waterfront LLC and Wharf Horizontal Reit Leaseholder LLC of conspiring to run Captain White’s and its businesses out of the Municipal Fish Market, the country’s oldest open-air fish market, which opened in 1805. One of the way the complaint alleges this was done was the closure of Water Street, the primary access road to the business.

Captain White’s businesses have long-term leases at the location and the original landlord was the District. But in 2014, D.C. assigned its rights to the developers, and the lease conflicted with development plans, according to the complaint.

In response to Captain White’s complaint, D.C. and the developers said they deny that they “entered into a conspiracy.” As to the closure of Water Street, they admit that D.C. passed a law closing it and admit that it is an access point to the Fish Market. But they said that they are “without knowledge or information sufficient to form a belief about the truth of” Captain White’s allegations.

Earlier this year, a U.S. District Court ruled that the leases of Captain White’s businesses were void and a judgment was entered against several of their allegations.

Below is the statement from Hoffman-Madison Waterfront:

“The operators of Captain White’s Seafood have informed us that they have decided to leave the Municipal Fish Market following a US District Court ruling earlier this year in a case the Whites filed against the District of Columbia and Hoffman-Madison Waterfront affiliates.

During its centuries of existence, the Municipal Fish Market has been home to dozens of different fish, produce, and food vendors and will continue to do so after the departure of Captain Whites—with the beloved Jessie Taylor Seafood remaining the anchor of the market.

Years before construction of The Wharf began, The Wharf development and operations teams worked tirelessly with District Officials to provide additional customer parking, security, and sanitation services to help preserve and grow the existing customer base of the Municipal Fish Market.

Hoffman-Madison Waterfront remains committed to preserving the legacy and vibrancy of the Municipal Fish Market that serves as a true gathering place for DC and will continue to carry on the rich tradition of small and local vendors selling fresh and affordable seafood at The Wharf for years to come.”

Captain White’s is not completely gone from waterfront, and have condensed into just one barge. Two boats moved Thursday, White said, adding that they have their full operation, just on a smaller capacity.

“So we’ve just condensed for the time being. We’re going to be here through Thanksgiving, but we’ll be leaving before December,” White said. The shop is looking to relocate and where it will move to will be announced at a later date.

“I just know that it’s not going to be here,” White said.

White said some of the staff have been with them for 30 years, and he thanks his customers for their support.

“We’re so grateful for the customers and the people of D.C. and around the metropolitan area that have supported us. We love them. And this is not at all what we wanted for them. But like I said, we’re going to try and open up a new spot to try and serve them,” White said.