A DC woman had her pumpkins stolen. Now, an area restaurant is helping her make pie

A D.C. restaurant donated pie pumpkins to a local military widow after the pumpkins she planted in her yard were stolen on Halloween.
Listen now to WTOP News WTOP.com | Alexa | Google Home | WTOP App | 103.5 FM
(1/3) 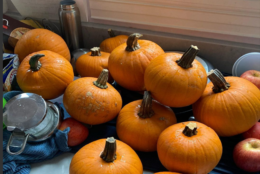 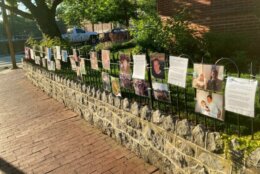 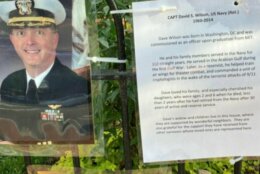 While much of the attention in the D.C. region last spring was on coronavirus vaccines and a return to normalcy, Northeast resident Sara Wilson and her daughters were thinking about pumpkins.

The family takes its pies seriously, she said, and aimed to grow pumpkins that can be used to prepare Thanksgiving pies.

They prepared the land outside their house in the spring and anticipated keeping the pumpkins on the vine until the season’s first frost. Their efforts only yielded two pumpkins, but they weren’t discouraged.

But on Halloween, Wilson and her daughters left to attend a church service, and when they returned, the pumpkins were gone. Beyond an expensive bike, the family never had anything stolen.

Wilson, a military widow who has lived in D.C. for 30 years, has become known in the neighborhood for her public displays. She has been hanging Christmas decorations for 20 years and her Memorial Day display honoring veterans spanned a whole fence.

So, she posted a sign outside her house on 4th and F streets, urging the thieves to return them, noting it’s the first time she grew pie pumpkins.

A neighbor in NE posted this sign on her yard. Someone stole the pumpkins she was growing to make pie for Thanksgiving sometime last night. Have any leads? Or, if you have pie pumpkins, can you share them and fill the void in her menu? Thank you to reader Emily W. for sharing. pic.twitter.com/sfntnbzj9v

D.C. blogs The Hill is Home and Barred in DC shared the post on Twitter, and while the original pie pumpkins haven’t been returned, Maketto restaurant expressed a desire to help.

On Tuesday, the restaurant delivered 12 pie pumpkins to Wilson.

“I was overwhelmed,” Wilson told WTOP. “I had no idea that anybody would have that kind of reaction. All I wanted was just my two pumpkins back. And instead, I just got 1,000 times more than I could have ever hoped for.”

Erik Bruner-Yang, Maketto’s owner, said he has been in California this week traveling for work but stumbled upon the social media posts. He ordered pie pumpkins a few weeks ago to use as decorations, and because his mother had recently died, he said he found the story touching.

“Everybody’s had a hard time the last couple of years,” Bruner-Yang told WTOP. “Sometimes, you just need a stranger to reach out. It can really help push you through whatever you’re going through.”

Because she received more than the two pumpkins she grew, Wilson said she is planning to bake extra pies and share them with the group Tragedy Assistance Program For Survivors, an organization that helps military families that have lost a relative.

The organization, Wilson said, is going to help her find “some families who can use the extra pies this Thanksgiving.”

The baking preparation is already underway, as Wilson said she ordered leaf lard from Central Pennsylvania that gets mixed with butter, flour and salt to craft the crust.

She’s planning to freeze the crust, and within the next week, she said she will roast and purée the pumpkins and also freeze that. Then, everything will be combined the week of Thanksgiving.

Wilson has a few recipes she likes to use, but she said the biggest factor is having fresh ingredients.

While she was initially frustrated by the stolen pumpkins, the community’s response to the incident has blown her away.

“Looking at those notes that people wrote in the blogs, it gave me chills,” Wilson said.

“To show my children the reaction that people had, they wanted to do anything they possibly could to give us comfort. They’re only two pumpkins, we could solve the problem like that. But it was more than that.”