Coronavirus News: Montgomery Co. to lift mask mandate | Some may need fourth shot | Va. among best for vaccinations | Local cases of COVID-19 | How many in DC region are vaccinated?
Home » Washington, DC News » Fire on roof of…

A fire at the top of a high-rise building under construction in D.C. is making smoke that can be seen for miles Thursday morning.
Listen now to WTOP News WTOP.com | Alexa | Google Home | WTOP App | 103.5 FM
(1/5) 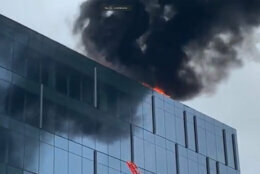 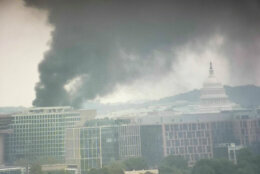 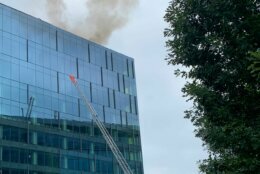 A fire at the top of a high-rise building under construction in D.C. made smoke that can be seen for miles Thursday morning.

The D.C. Fire and EMS Department said the fire started around 10:30 a.m. at the top of a building at 7th and D streets in Southwest. They said at about 10:50 that the fire appeared confined to the roof and some roofing materials that were on top, and that about 100 firefighters were on the scene. At about 11:15, they tweeted that the fire was out.

Metro confirmed that the fire was on top of their future headquarters at 300 7th St. SW, at the L’Enfant Plaza station. The entrance at 7th and D streets is closed, they said, but the other entrances are open, and trains are running undisrupted.

The fire department said shortly after noon that the fire was accidental. Contrary to their earlier reports, one firefighter suffered minor injuries. At about 1 p.m., they added that a second firefighter was taken to a hospital was “a non-life threatening medical condition.”