A ribbon cutting at Franklin Park in downtown D.C. on Friday celebrates the top-to-bottom transformation of public space that dates back to the 1850s.
Listen now to WTOP News WTOP.com | Alexa | Google Home | WTOP App | 103.5 FM
(1/9) 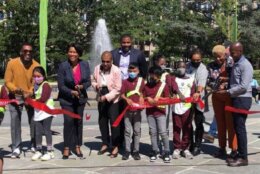 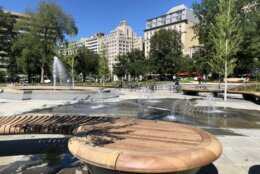 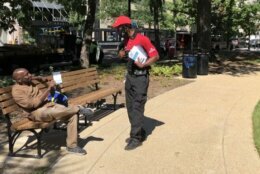 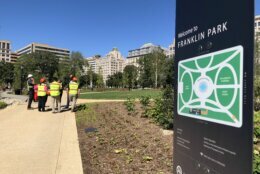 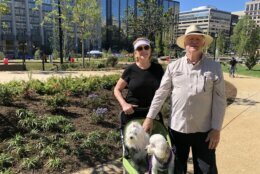 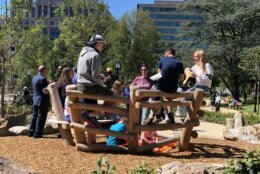 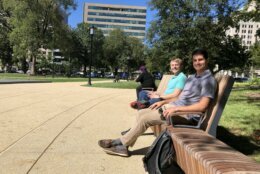 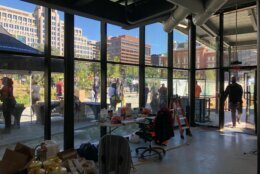 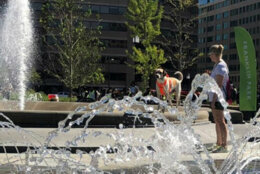 A ribbon cutting at Franklin Park in downtown D.C. on Friday celebrates the top-to-bottom transformation of the public space that dates back to the 1850s.

“Franklin Park’s origins are in a freshwater spring that served the White House early in its incarnation, this place was here not because of the L’Enfant Plan, but because of the capacity of this Wellspring to serve the White House,” said David A. Rubin of the David Rubin Land Collective, which designed the renovated space with Studios Architecture.

The renovation is a result of the partnership between its owners, the National Park Service, the Downtown DC Business Improvement District and the city that paid $21 million for the upgrades.

The park’s heritage has been focused into the experience of enjoying its fountains and from-the-ground water sprays.

A lot of what’s new isn’t visible because it took place underground. For example, the site captures 100% of stormwater, and replacing soil mixtures helps control erosion.

“This park before had a lot of erosion issues because the soil was extremely compressed, because the landscape architect David Rubin likes to use a term — ‘The park was well loved,'” said Ja-mes Jones, Smoot Construction project manager for the renovation.

“People love the park, so with the compression of the soil and the planting beds, you essentially had surfaces that were as dense as concrete.”

Jones is from Baltimore and feels like he is “part of the DMV.”

“This was a labor of love,” Jones said. “There are a lot of new things in the park that were not existing before. Custom wood benches, fountains, all sorts of variety of trees.”

“And a nice little tip — this park looks fantastic when the sun starts to set,” he continued. “There is lighting all over this place. So it’s phenomenal.”

People who use the park agree.

“It’s night and day,” Joe Schuman explained to a hew hire at his workplace, Josh Wallin, who was seeing the space for the first time during their lunch break. The two were sitting on some of the new custom benches.

“The grass, the trees, that’s all new. It was kind of all concrete before hand; big improvement,” Schuman said.

There’s also a playground with a slide for kids.

Two years ago, “I wouldn’t have recommended it for children,” Ken Swart said, while his companion, Aggie Byers.

They commented that chicken bones were regularly found in the park and presented a major choking hazard for dogs. Now, they’re impressed; using phrases like “absolutely gorgeous” and “it’s just wonderful.”

Franklin Park also used to be populated by people experiencing homelessness who set up tents on the grounds.

New signs identifying banned activities including ‘camping’ are positioned by multiple entrances. However, community members are skeptical that will be much of a deterrent.

The park is federal land and U.S. Park Police have the ability to remove illegal campers, but measures are being taken to direct that population toward other options and services.

Listen to Hospitality Ambassador Anthony Price’s conversation with a man who calls himself “The Voice of the Experience”:

“Anybody who’s going to suggest that dealing with encampments and homelessness is a simple solution is unfamiliar with human behavior and the very intense needs of individuals who choose to live on the street,” Mayor Muriel Bowser told reporters after the ribbon cutting ceremony.

“We provide shelter in the District of Columbia for people who are homeless,” Bowser continued. “We are going to work with every one of our services to make sure people avail themselves of those services. But we stand firm and our belief that sleeping in tents is not safe for the people who are unhoused or for the community.”

Read More: Homeless encampment residents speak on DC’s plan to clear them out

Alesha Knott, who works for the DowntownDC BID, said that “It’s great being a part of this new addition to the community and city” while helping to clean up the park.

The Business Improvement District is reviewing applicants to a Events and Programming Manager position for Franklin Park. The intention is for “robust programming” to include outdoor concerts, meditation sessions, Qi Gong, children’s music and dance, and more.

Though the restrooms are finished, the pavilion and restaurant have yet to be completed.