D.C. is moving ahead with plans to clear a homeless encampment in the NoMa neighborhood, but the deadline has been pushed back.
Listen now to WTOP News WTOP.com | Alexa | Google Home | WTOP App | 103.5 FM
(1/2) 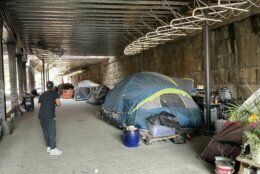 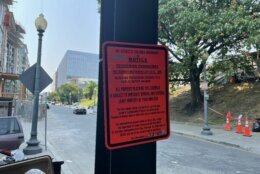 D.C. is moving ahead with plans to clear a homeless encampment in the NoMa neighborhood, but WTOP has learned the deadline has been pushed back.

The encampment, which has existed for years, is under the L Street Northeast overpass, and in other nearby areas. Some people who live there say a bright orange sign is the only notice they’ve received that their possessions will be removed.

One man, who preferred to remain anonymous, said the District has spoken to him about finding permanent housing.

“I’m not gonna say they promised us; they’re saying they are trying to help us,” he said.

According to D.C. officials, the new program to clear this encampment and two others includes intensive case management and expedited access to permanent supportive housing.

In addition to the NoMa encampments at L and M streets, the other two are in Allen Park, at O Street and New Jersey Avenue Northwest, and in the area of E Street near 21st and 22nd streets Northwest.

The deadline for the people to clear their belongings has been pushed back to Sept. 27, said D.C. Deputy Mayor Wayne Turnage. “We want to give our partner who is working with us, Pathways, as much time as they need to be successful,” he said.

Turnage also said the city has identified a large number of persons in the encampments who are expected to soon get new indoor permanent housing.

“We have identified 103 people by name across four encampment sites,” he said. “I would venture to guess less than 5% of those will reject the offer of housing,” which Turner says people do have the right to reject.

Some people told WTOP they have lived there for three years or more, and they think this is happening now because of new apartments and stores being built steps away.