The northbound lanes of the 3rd Street Tunnel in Washington, D.C., have reopened. The southbound lanes remain closed between New York and Massachusetts avenues.

On Thursday, DC Water said the southbound portion of the tunnel between New York and Massachusetts avenues will remain closed until further notice while crews work to protect the water system from future breaks.

The tunnel was closed earlier this week due to repairs to a water main break.

8-26 UPDATE – The work to restore the roadway in the 3rd Street Tunnel has begun. We continue to partner with @DDOTDC on this effort which is expected to take several additional days: https://t.co/EXucPp1woI pic.twitter.com/SAqTahZWKX

Crews proceeded with caution to protect the structural integrity of the tunnel when a ruptured main Sunday night sent water pouring down the walls and compromised the roadway, breaking up asphalt. By Monday, the whole tunnel had been closed.

The District Department of Transportation (DDOT) and DC Water are currently working to repair the pavement that was damaged during the initial break and the following efforts to repair it.

According to the WTOP Traffic Center and listener reports, here’s what drivers should know:

For the latest traffic conditions, see WTOP’s traffic page or listen to updates every 10 minutes online or on the air at 103.5 FM. Have an update? Let us know by calling 866-304-WTOP or tagging @WTOPtraffic on Twitter.

The location of the leak was narrowed down, but David Gadis, the CEO and general manager of DC Water, said Tuesday it was in a “very difficult area of the tunnel.”

“This break is behind an auxiliary wall in the tunnel. The tunnel has the lanes, and then it has an auxiliary wall behind it, and it’s tucked in behind that. What makes it tough is we want to keep the integrity of the tunnel,” Gadis said, adding that they want to make sure workers are safe and that after repairs are completed, the tunnel is safe to drive through.

Once crews had pinpointed the location of the break — which was in an 8-inch main installed in 1974, which also services several fire hydrants — they were able to make the necessary repairs.

So far, no structural integrity issues with the tunnel have been found, D.C. Deputy Mayor for Public Safety and Justice Chris Geldart has said.

Below is a map of the affected area: 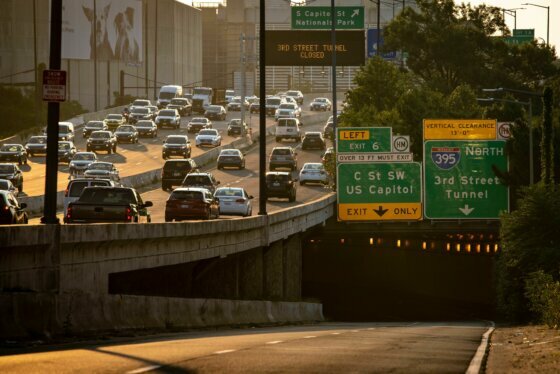