‘If I sound frustrated it’s because I am’: Ward 6 council member rips DC schools

D.C. Council member Charles Allen held a virtual town hall with education leaders, advocates and parents in Ward 6 on Thursday night and plainly admitted his growing frustration with the city’s school leaders ahead of Monday’s start to the new school year.

Allen cited some of the things he’s seen himself on visits to schools — “HVAC systems that aren’t working as they need to, spot coolers being used in spaces, outdoor equipment not delivered on time” — as signs the District of Columbia Public Schools is not prepared for the first day of classes.

“I found teachers, our educators and even our principals and school leaders, working really hard trying to create welcoming and safe spaces for students,” Allen said. “But the systems around them have let them down.”

“If I sound frustrated it’s because I am.”

Allen was joined by Jessica Sutter, the Ward 6 representative to the D.C. State Board of Education, who pointed out that in some cases the HVAC systems were still circulating air, but it might be hot air sometimes — which would still be uncomfortable.

In at least one case, HVAC system wasn’t working at all to circulate air in a school cafeteria.

Their biggest gripes had to do with what they perceived as DCPS’ intentional inflexibility with virtual learning options, which Allen said are too narrow and exclusionary.

He said that as of a few days ago, just over 100 students were enrolled in the virtual program the city was offering.

While he doesn’t want to see the whole school system go virtual again, he does think getting into the program should not be so strict.

“I’ve heard from plenty of folks who said their pediatrician was actually concerned about even signing the form [for acceptance into virtual programs] from a medical liability perspective,” Allen said.

He said he thinks the low overall number of applications for the virtual option isn’t really reflective of the interest and demand. “I think it is because it is so narrowly tailored, which I think was done on purpose,” said Allen.

“People don’t feel like their voices are being heard elsewhere,” said Sutter.

She was among those who signed a letter to Mayor Muriel Bowser asking for DCPS to expand the number of students eligible for virtual activities.

“We’ve heard from a lot of families that one child was given a medical exemption, but they have siblings,” Sutter said. “It doesn’t do much good to have one child learn virtually while others may be exposed and bring home, even if it’s not a COVID case, other germs that are going to start moving again as children gather,” said Sutter. 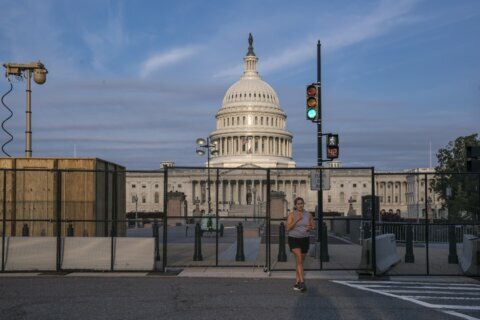 Fences up, security heightened as DC prepares for ‘Justice for J6’ rally