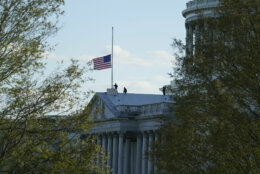 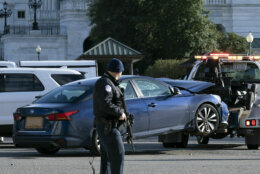 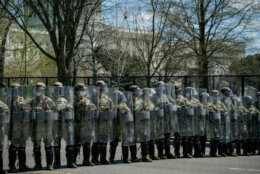 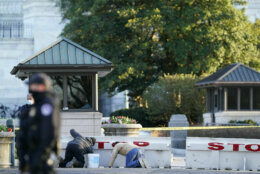 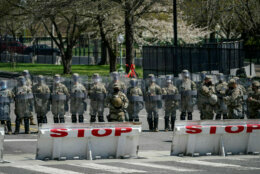 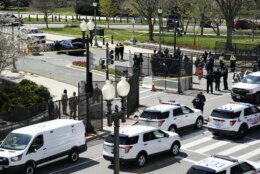 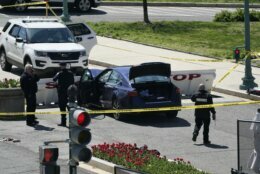 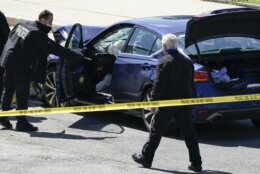 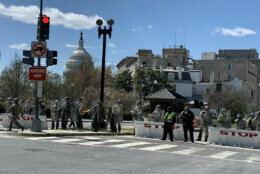 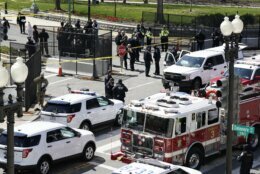 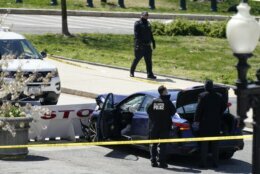 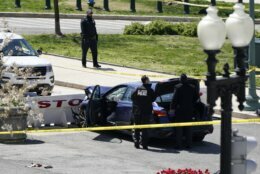 A U.S. Capitol Police officer was killed and another officer was injured after a knife-wielding man rammed his car into the officers near a Capitol Hill security barricade Friday afternoon, authorities said.

The man rammed the officers shortly after 1 p.m., and then crashed into the North Barricade along Constitution Avenue, Acting U.S. Capitol Police Chief Yogananda Pittman said at a news conference Friday afternoon.

The man then emerged from the car “with a knife in hand,” and “started to lunge toward” the officers before he was shot by one of them, Pittman said.

The suspect, as well as both officers who were struck by the car, were taken to hospitals, where the suspect and one of the officers died.

“It is with a very, very heavy heart that I announce one of our officers has succumbed to his injuries,” Pittman told reporters.

The slain officer was later identified as William “Billy” Evans, an 18-year veteran of the department. He was a member of the Capitol Division’s first responders unit.

In a statement on Twitter, Capitol Police said the other officer who was struck is in “stable and non-threatening” condition.

Law enforcement sources confirmed to WTOP’s national security correspondent J.J. Green that the suspect was identified as 25-year-old Noah R. Green, who may have originally been from Indiana, but was believed to living in Virginia more recently.

Green described himself as a follower of the Nation of Islam and its founder, Louis Farrakhan, and spoke of going through a difficult time where he leaned on his faith, according to recent messages posted online that have since been taken down. The messages were captured by the group SITE, which tracks online activity, The Associated Press reported.

U.S. Capitol Police officer Brian Sicknick was one of five people who died in the chaos following the storming of the Capitol by a pro-Trump mob in January.

He said it did not appear the suspect was known to authorities. He also said the incident didn’t appear to be tied to terrorism or a larger threat, but he said authorities were still investigating the motive.

“At this time, it does not appear to be an ongoing threat,” Contee said. “Obviously we’re in the very early stages of our investigation. We need to, obviously, understand the motivation behind this senseless act.”

The National Guard quickly deployed an “immediate response force” to the Capitol Complex to support U.S. Capitol Police in responding to the incident.

Pittman said she was grateful for the assistance from the National Guard. She said, overall, the security posture at the Capitol would remain in a “steady state.”

Congress is not in session; journalists, staffers and police officers were still in the building at the time a security alert went out shortly after 1 p.m.

The incident occurred about 100 yards from the entrance of the building on the Senate side of the Capitol. Fencing that prevented vehicular traffic near that area was recently removed as the Capitol has started to open up after the Jan. 6 riots. Fencing around the interior perimeter is still up.

The Associated Press reports that one witness, the Rev. Patrick Mahoney, said he was finishing a Good Friday service nearby when he heard three shots ring out.

In a statement, the U.S. Capitol Police Union said: “This is a tragic situation that adds to a very difficult year for our membership … Our members are some of the most well trained and professional officers in the country and this is a catastrophic example of the risks they take every day, putting themselves in harm’s way to protect our Capitol, its occupants, and the seat of democracy itself.”

A procession carrying the remains of the slain officer made its way through D.C. Friday afternoon to the Office of the Chief Medical Examiner. D.C. firefighters at the nearby fire station paid their respects.

Members of #DCsBravest Engine 13, Truck 10, Ambulance 13 and the Foam Units pay their respects as the procession carrying the remains of slain @CapitolPolice Officer William “Billy” Evans arrives at the office of the Chief Medical Examiner adjacent to their quarters. pic.twitter.com/XSnlP7GIlh

This is a developing story and will be updated.