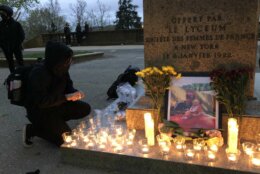 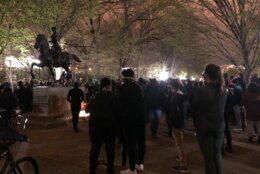 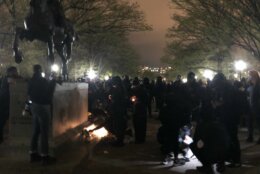 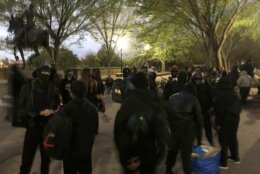 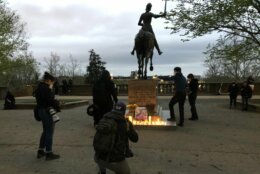 Demonstrators marched through downtown D.C. late Monday over the shooting death of Daunte Wright in Brooklyn Center, after the Minnesota city’s police chief described the 20-year-old man’s death as the result of an “accidental discharge” by an officer intending to fire a Taser.

After sundown, racial justice protesters gathered at the foot of a Joan of Arc statue in Northwest D.C.’s Meridian Hill Park, also known as Malcolm X Park, where they lit dozens of votive candles around an 8-by-10 image of Wright and his one-year-old son, Daunte Jr.

“It was a terrible thing that happened, it’s just too common today,” said a man present at the vigil who declined to provide his name. “She (the officer) ought to be in jail, because if anybody in any other job did something like that, then they’d be in jail.”

Protesters marched out from the park after dusk, crossing the U Street corridor.

The front of the march bore black umbrellas in a scene reminiscent of sustained protests sparked by the killing of George Floyd; a flyer advertising the date and time of Monday’s vigil was widely circulated by local activist collectives formed last spring.

Many wore all-black clothing, helmets and hoods — a decades-old protest tactic used worldwide to mask the identity of participants from police surveillance, and to maintain anonymity in photos or videos posted to social media.

The group entered the Dupont Circle Metro station around 9:30 p.m. and boarded a Red Line train, continuing their chanting during the ride to Gallery Place. Some skipped over the turnstiles.

Protesters on a train! pic.twitter.com/6ujcjIStDg

The march continued for a time in the Chinatown and U Street areas, setting off small fireworks amid the rain. It ended just before midnight at Meridian Hill park, where organizers encouraged participants to get home safely.

U.S. Park, Metro Transit and D.C. police contributed to a multi-agency law enforcement presence that followed the demonstrators. There were no arrests.

Monday evening brought renewed clashes in Brooklyn Center as local police, Minnesota state troopers and National Guard pushed to clear protesters from the area around a police station less than two miles from the site of Wright’s death during a traffic stop on Sunday. On Monday, investigators identified the officer who fired the gun as 48-year-old Kimberly Potter, who has been placed on leave.

Tear, rubber bullets and flash grenades were fired to disperse hundreds of protesters who remained on the streets after the start of a curfew imposed on four counties by Minnesota Gov. Tim Walz. As lines of police swept through the block, at least one tear gas canister landed in a ground-level apartment terrace. Forty people were arrested.