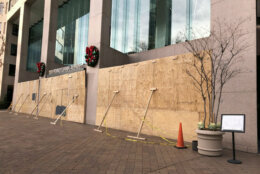 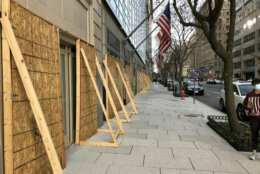 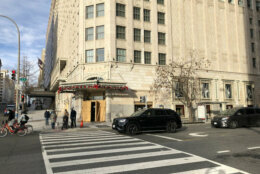 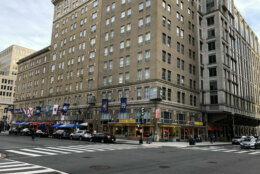 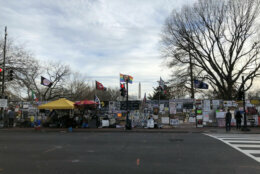 Business operators in downtown D.C. were unwilling to speak Saturday afternoon about their concerns before Wednesday’s electoral vote count and if planned protests could spark trouble on the streets.

President Donald Trump’s die-hard supporters vowed to come to D.C. to rally and protest on the day Congress votes to affirm President-elect Joe Biden’s victory. The president has encouraged these demonstrations, promising it will be “wild.”

In November and December, election protests drew members of the extremist group the Proud Boys, and some confrontations turned violent in the neighborhood close to Black Lives Matter Plaza, just north of Lafayette Square.

One business operator in the neighborhood of the Harrington Hotel and Harry’s Bar on 11th Street NW, said he was not expecting any trouble because the hotel and restaurant, which became bases for members of the Proud Boys group, will be closed for a few days. Other business operators declined to be interviewed.

Street-level windows and glass doors have been boarded with plywood at some businesses and office buildings. Others, including CVS, Nordstrom Rack and restaurants with outdoor dining, were conducting business unimpeded.

Visitors to Black Lives Matter Plaza, the 900 block of 16th Street NW, were having none of Trump’s claim that he was cheated in a fraudulent election and rejected Republican plans in Congress to object to the electoral count on Wednesday.

“I think the election was absolutely fair; I personally sent in a mail-in ballot,” said J’lah Johnson, 18 of Clinton, Maryland. “You haven’t seen something like this ever before in history where people are calling elections fraudulent without any information, without any evidence at all.”

“I hope we won’t have the Proud Boys come back to D.C.,” Johnson added.

“It’s going to put these people (Congressional Republicans) on record, and as we look to future elections, those people have cast their lot and made a decision that hopefully doesn’t bode well for them as we move past the Trump presidency and he has less clout,” said Adam Pentony of Frederick, Maryland.

Visitors strolled the plaza, took pictures and viewed the paintings and slogans that festoon the tall fence blocking access to Lafayette Square.

The plaza, a site of weeks of protests that began in the summer following the May death of George Floyd at the hands of police in Minneapolis, remains under a strong D.C. police presence.

“The only way that we can possibly get through this is to just come together, and I think that’s what it’s all about is coming together, and I’m down here today taking pictures,” said Tim Allen of Martinsburg, West Virginia. “Hopefully to show people you can come together, you can be a Republican or a Democrat, we have to all be the same way on this,”.