You don’t have to go home, but you can’t stay here.

Two downtown D.C. hot spots for the far-right Proud Boys — supporters of President Donald Trump and his continued, baseless claims about voter fraud in the 2020 election — will be closed during the planned Jan. 6 rally.

Hotel Harrington and Harry’s Pub will both be shuttered during the demonstration. In a Facebook post on Monday, the Hotel Harrington said it will close its doors from Jan. 4 to Jan. 6, citing visitor and employee safety. Refunds will be made to any prepaid reservations. 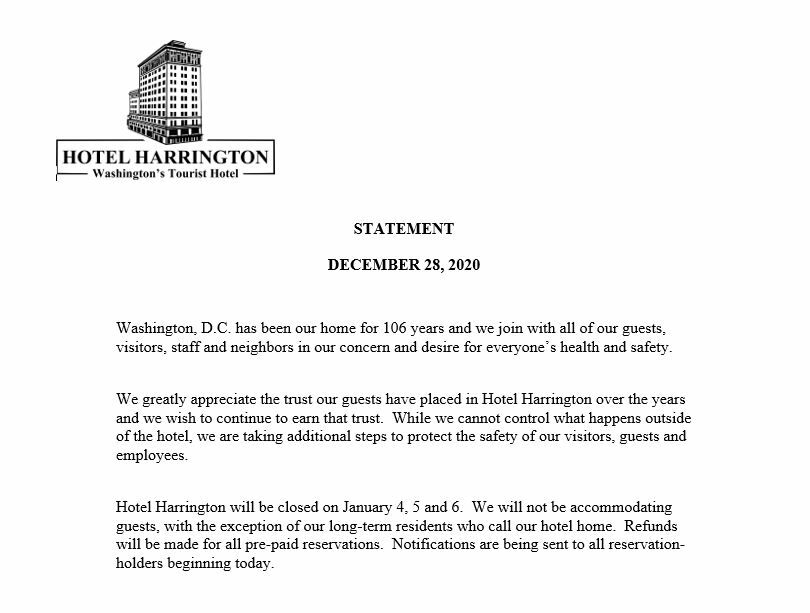 On its website, Harry’s Pub simply said it will be closed Jan. 5 and Jan. 6 with no further comment immediately available.

Hotel Harrington’s Facebook statement has well over 100 replies with voices chiming in from both sides.

“This place is ran by un-American racists,” one user said, posting a one-star review of the hotel. “They cater to terrorist organizations like antifa and the racist group Black Lives Matter. I would not recommend this place to my worst enemy.”

“Thank you for standing up against domestic terrorism,” commented a Facebook user on the hotel’s page.

Harry’s has recently been fined for multiple violations of local COVID-19 restrictions — including overcrowding and patrons not wearing masks.

The pro-Trump rally slated for Jan. 6 is the same day Congress is set to ratify Joe Biden’s election win. Organizers Women for America First says it expects some 5,000 participants for each park area to be used, according to the permit application.

The extremist Proud Boys group — who clashed with counterprotesters earlier in December in a night of violence that left four stabbed, including a police officer, and burned banners at Black D.C. churches — have vowed to be present in D.C. for both the Jan. 6 rally and Biden’s inauguration on Jan. 20.

Trump has encouraged his supporters to rally on Jan. 6: “Be there, will be wild,” he tweeted earlier this month, in a post Twitter later flagged for containing misleading information about election fraud.

Peter Navarro releases 36-page report alleging election fraud ‘more than sufficient’ to swing victory to Trump https://t.co/D8KrMHnFdK. A great report by Peter. Statistically impossible to have lost the 2020 Election. Big protest in D.C. on January 6th. Be there, will be wild!