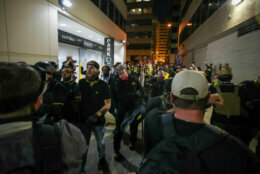 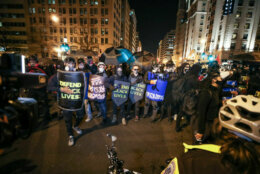 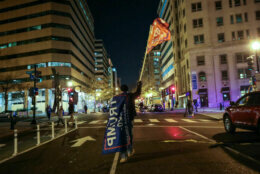 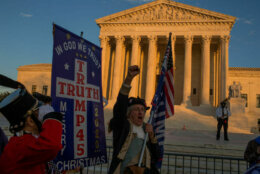 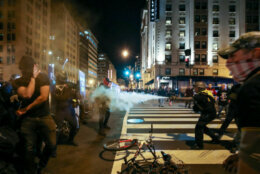 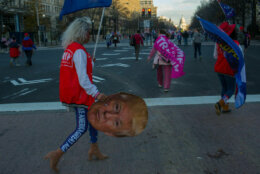 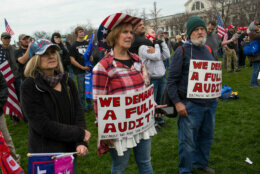 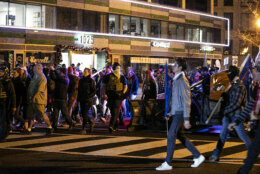 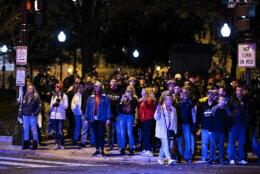 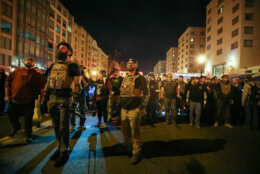 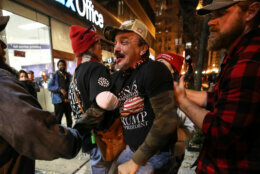 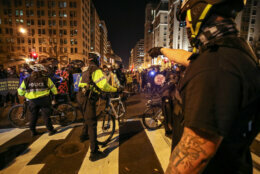 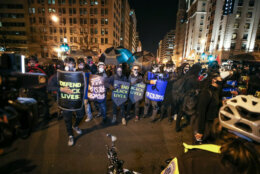 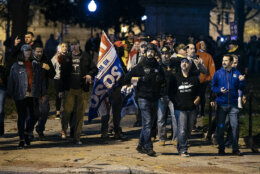 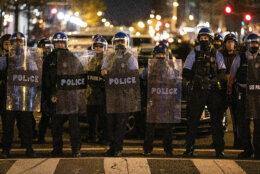 Thousands of supporters of President Donald Trump returned to Washington for weekend rallies to back his desperate efforts to subvert the election that he lost to Joe Biden.

Sporadic fights broke out between pro-Trump and anti-Trump demonstrators after sundown Saturday.

Four people were stabbed and are in non-life threatening condition, one of them a police officer, D.C. police told WTOP.

Police arrested 33 people for various offenses, such as assault on a police officer, simple assault, riotous acts, possession of a prohibited weapon and crossing a police line, according to D.C. police data.

D.C. police said they arrested 30-year-old Omar Knight, of Rockville, Maryland, for assaulting an on-duty police officer on Saturday. Knight was also charged in a similar case that happened in May of this year.

The gatherings of mostly unmasked Trump loyalists were intended as a show of force just two days before the Electoral College meets to formally elect Biden as the 46th president. Trump, whose term will end Jan. 20, refuses to concede, while clinging to baseless claims of fraud that have been rejected by state and federal courts, and Friday by the Supreme Court.

WTOP’s Alejandro Alvarez said the Proud Boys, one of the more extreme right-wing groups at Saturday’s protests, were out “in force” around 8:30 p.m.

Proud Boys have spent the better part of an hour weaving through traffic around the fringes of Black Lives Matter plaza. They’re out in force tonight. This group walked up to an exit-only police cordon before doubling back to the Harrington. pic.twitter.com/wnu9uqtsJO

Fights are breaking out between Proud Boys staying at hotels near the White House and protesters. Sporadic so far, one brief but intense clash ended with a firework going off at Hyatt Place near K and 16th. People still being treated for pepper spray exposure. pic.twitter.com/3ax3G8AHZd

At one point in the night, D.C. Police Chief Peter Newsham made an appearance at the protests.

Earlier, WTOP’s Ken Duffy reported several “clashes” between protesters and counterprotesters in the general vicinity of the plaza as night fell. Duffy also witnessed police attempt to enter the crowds around 4:30 p.m. as water bottles and at least one smoke bomb rained down on them.

Duffy said a “silence” fell over the plaza as police blocked off three of the entrances to the plaza with police lines, creating a barricade preventing them from advancing or leaving the area.

D.C. police allowed protesters to leave through the one unblocked exit, and Black Lives Matter Plaza was nearly completely cleared out, Duffy reported.

He said several Trump supporters attempted to walk down Black Lives Matter Plaza but were chased out by counterprotesters.

Duffy reported that many of the counterprotesters were affiliated with the group DefendDC.

The two most prominent groups at that protest were “Million MAGA March” and “Women for America First.” Both groups were calling for “transparency” as the Electoral College prepares to convene to seal Biden’s victory.

Freedom Plaza is one area where it’s hard to get a crowd view from ground level. Best try. The pro-Trump crowd is spread out between three events this morning—this, the Jericho March on the Mall and another rally at the Supreme Court. pic.twitter.com/XvG9YncjgQ

Some protesters began filtering into Black Lives Matter Plaza as early as Friday afternoon, and some traded barbed words with those who were already in the plaza.

On Friday, WTOP’s Ken Duffy said he witnessed an exchange where supporters of President Trump began yelling back and forth with counter protesters, before a Trump supporter yelled back, “I’ll see you tomorrow.”

D.C. police said five demonstrators were arrested on assault charges between Friday night and Saturday morning. Of those arrested, three are from Maryland, another is from Virginia and one is from New York.

The weekend rallies came a month after a pro-Trump demonstration that drew at least 10,000 people to the capital. The day began with Trump thrilling his supporters by driving by in his limousine and ended with scattered clashes between Trump supporters and D.C.-area activists near Black Lives Matter Plaza.

Saturday’s rallies were meant as a show of force just two days before the Electoral College meets to formally elect Joe Biden as the next president. Trump refuses to concede the election, citing baseless claims of fraud.

The Supreme Court on Friday rejected a lawsuit to overturn Biden’s election victory, ending an attempt to get legal issues rejected by state and federal judges before the nation’s highest court.

Despite the ruling, recently pardoned national security adviser Michael Flynn spoke to the crowds on Saturday and encouraged them to keep hope in President Trump’s bid to overturn the election results.

One of the rallies was held at Freedom Plaza downtown and the other nearby on the National Mall.

At Freedom Plaza, demonstrators erupted into cheers as Marine One flew over the crowd midday Saturday. Earlier in the day, President Trump had said he planned to go to West Point, New York to attend the Army-Navy football game.

Organizers of the Freedom Plaza rally seemed intent on avoiding confrontations, telling demonstrators to avoid certain hotels and marking off large chunks of downtown Washington as a “no-go zone.”

The event on the mall, dubbed the Jericho March, was described on its website as a several-hour “prayer rally” with a series of sermons and speakers “praying for the walls of corruption and election fraud to fall down.”

WTOP’s Will Vitka, Abigail Constantino, Zeke Hartner and The Associated Press contributed to this report.