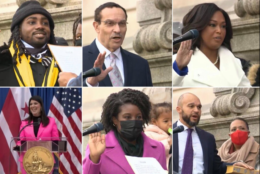 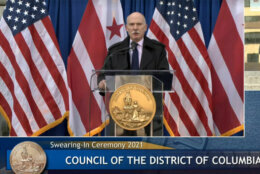 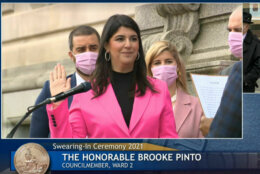 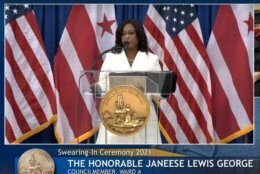 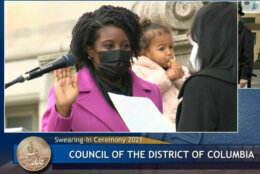 The D.C. Council welcomed its newest members on Jan. 2, and — for the first time in two decades — women hold a majority of the seats.

During Saturday’s swearing-in ceremony, the council officially welcomed Janeese Lewis George, who won the seat in Ward 4, and called the win the greatest privilege of her life. After being sworn in, she thanked residents and reinforced her support for developing green jobs and affordable housing, pushing for living wages and an inclusive social safety net.

“And, we can enfranchise and break Congress’ stronghold over our community by achieving DC statehood,” she said in a ceremony outside the Wilson Building on Pennsylvania Avenue near Freedom Plaza in downtown D.C.

Christina Henderson won one of two at-large seats. Brooke Pinto was elected to represent Ward 2, and thanked residents for voting.

“This collective involvement is how we not just look forward, but move forward,” she said.

In total, seven of the council’s 13 seats are now held by women.

Mayor Muriel Bowser also attended the ceremony and welcomed the new members in a statement, stressing the job ahead when it comes to ending gun violence and bringing the District out of the pandemic.

“The road ahead is long,” she said. “But I look forward to working with all the members of the council to, as we each swear to, represent the District of Columbia — as a whole — without fear or favor.”