D.C. Mayor Muriel Bowser outlined the security steps she and the District are taking ahead of President-elect Joe Biden’s inauguration next week in the aftermath of the deadly siege at the U.S. Capitol, even as she faces direct threats herself. “Upwards” of 20,000 National Guard troops will also be deployed to the District.

“Exactly one week ago, there was a violent insurrection at the capital of the United States that has impacted the way we are approaching working with our federal partners and planning for the 59th inauguration,” Bowser said during a news conference Wednesday, detailing increased preparations that include a pre-Emergency Declaration for the District.

Bowser expanded on recent calls from local leaders not to come to the Jan. 20 inauguration.

She added that, as D.C. sets up widespread street closures, “individuals entering the (inauguration) perimeter may be subject to screening and asked to describe their essential business — so be prepared to do that.”

In addition, starting Friday, parking garages in restricted zones will be blocked off at 6 a.m.

“Residents and businesses between 19th to 14th streets Northwest and K Street to Constitution Avenue are already being advised of restrictions beginning Thursday morning,” Bowser’s situational update reads, with more information to come for any other potential restrictions. 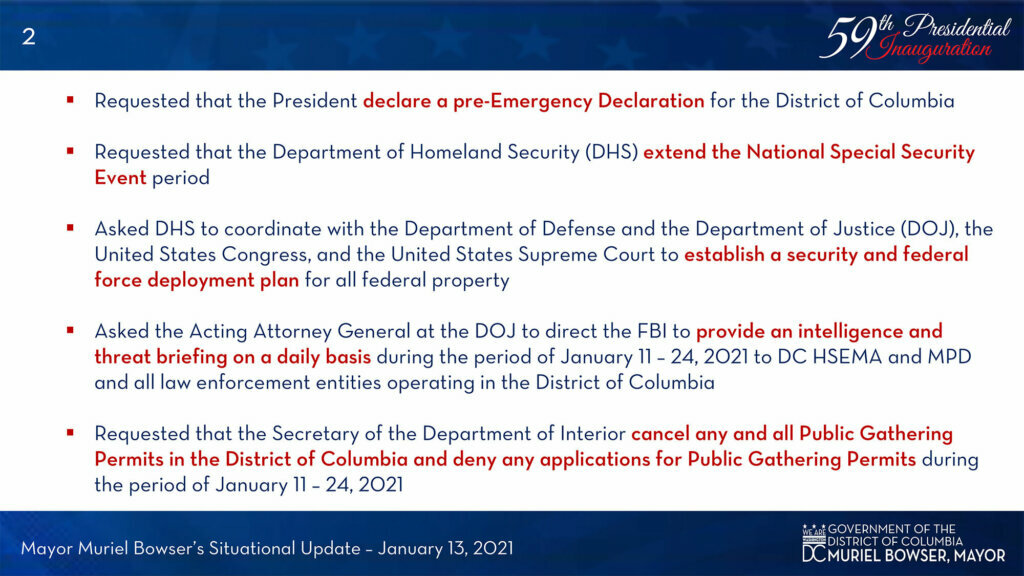 The mayor herself was directly threatened with violence by Cleveland Meredith in a text, according to court documents. “After arriving in Washington, D.C., the defendant sent a text that stated, ‘I may wander over to the Mayor’s office and put a 5.56 in her skull,'” the document reads.

The FBI said Meredith also texted his intent to kill Democratic House Speaker Nancy Pelosi: “Thinking about heading over to Pelosi [expletive]’s speech and putting a bullet in her noggin on Live TV [purple devil emoji].”

FBI agents determined that Meredith was staying at the Holiday Inn at 550 C St. SW, contacted him, and searched his room after he consented on Jan. 7.

According to court documents, Meredith had intended on getting to D.C. on Jan. 5, ahead of the deadly riots by supporters of President Donald Trump, but was waylaid by a broken taillight in Ohio. “Just fixed … headed to DC with a [expletive] ton of 5.56 armor piercing ammo [purple devil emoji],” Meredith allegedly texted.

When he was arrested, Meredith had a Glock 9mm G19 and a Tavor X95 rifle equipped with a telescopic sight, the FBI said.

“The defendant was also in possession of several high-capacity magazines and approximately 2,500 rounds of ammunition of various caliber, including at least 320 rounds of ‘armor-piercing’ 5.56 rounds,” the documents say.

“I get threats a lot,” Bowser said Wednesday. “I don’t know the number off the top. And if MPD thinks that it’s actionable, then they will implement whatever measures they think are necessary.”

Acting D.C. police Chief Robert Contee said, “Our response to the mayor’s security — obviously, the Metropolitan Police Department, and me personally, we’re responsible for that. But we do not discuss the specifics of the mayor’s, of our security detail.”

As a result of the assault on the Capitol and threats of more violence, 20,000 National Guard troops will be in D.C. for the inauguration, Contee said.

In addition, fencing and concrete barriers were erected in areas surrounding the Capitol.

Bowser touched on hotels and increased security, saying that “the hotels we are working with, our hotels are very concerned.”

“First of all, those that are in the perimeter will have some access concerns. There are some safety concerns for their personnel as well. We will have a lot of people in town just supporting the security apparatus. And so, we are trying to understand and balance the need for housing with also our encouragement that people not travel here,” she said.

As for whether or not hotels will close, Bowser said, “We haven’t made any determinations yet.”

“But we’re trying to give a lot of advice to our hotel operators. … Prior to [Jan. 6], there were a couple of hotels that decided to close their operations for the safety of their personnel and the integrity of their business operation. I think you’ll see some hotels do that,” she added.

A staff member from Bowser’s office told WTOP that they are working to send a message to hotels to review their plans for security, staffing and supplies, saying that enhanced security should be in place; there’s a plan to offer housing on site to staff; and making sure that there are enough supplies to last through the inauguration.

Airbnb canceled reservations in the D.C. area and blocked new bookings next week for the presidential inauguration amid security concerns following the deadly storming of the Capitol.

“While I don’t think we told them that this was the action that they should take, I can understand it, and we will continue to work with our residents who have questions,” Bowser said.

In a tweet, the D.C.-area hotel workers’ union put out a statement calling for hotels to close ahead of the inauguration.

“We are calling on hotels in the DC region to close ahead of inauguration, unless they are hosting security personnel. Any hotel that stays open must permit workers to stay home and/or leave the moment they feel unsafe.”

We are calling on hotels in the DC region to close ahead of inauguration, unless they are hosting security personnel. Any hotel that stays open must permit workers to stay home and/or leave the moment they feel unsafe. Our full statement ⬇️ pic.twitter.com/SB1Tfwanfs

Bethesda, Maryland-based Marriott said in a statement that its D.C.-area hotels will be open.

“We plan on keeping our commitment to existing reservations. We of course have the safety of our guests and associates top of mind given the recent events. We are monitoring the situation very closely and have operational and security plans in place,” Marriott said.

A Hilton spokesperson said its hotel teams in D.C. are “very experienced and have a long history of successfully managing through major public events.”

“We have no plans to cancel hotel reservations and look forward to welcoming the many inauguration-related suppliers, government officials, medical professionals, media representatives, military and law enforcement who are traveling to Washington D.C.,” a Hilton spokesman said.