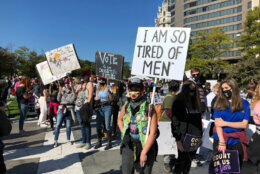 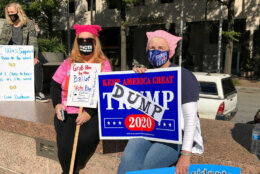 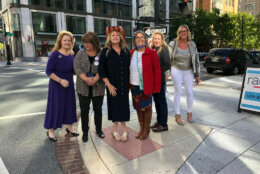 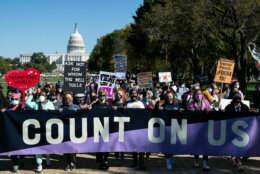 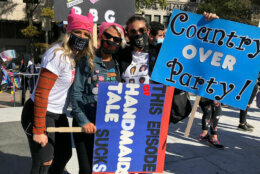 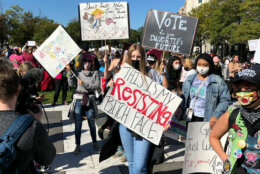 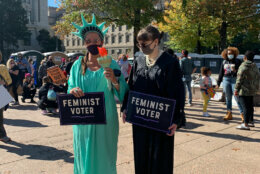 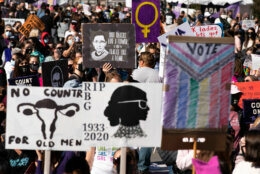 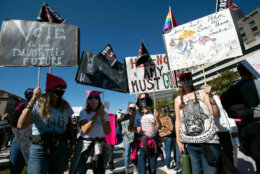 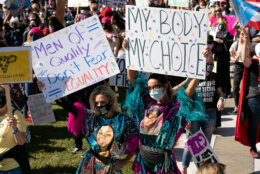 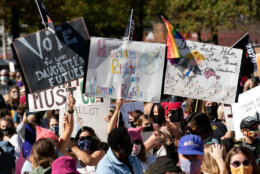 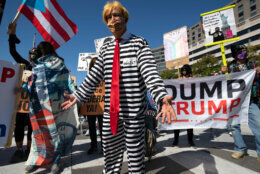 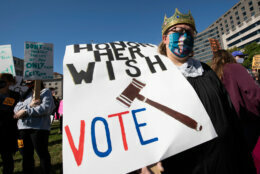 The Women’s March Saturday in D.C. gave thousands of people a chance to express their opposition to President Donald Trump and his policies just weeks before Election Day.

Demonstrators rallied in dozens of other cities from New York to San Francisco to signal opposition to Trump and his policies, especially the push to fill the seat of late Supreme Court Justice Ruth Bader Ginsburg before Election Day.

The first Women’s March was held the day after President Trump’s inauguration in 2017.

This year’s march was also a chance to focus on last-minute get-out-the-vote efforts.

Organizers said this march will be capped off with a “text-banking telethon” that aims to send 5 million texts encouraging citizens to vote in this year’s presidential election.

The event was meant to act as a bookend to the incumbency of President Donald Trump, organizers said.

The Women’s March is holding a multi-city round of protests they’re calling #CountOnUs to build momentum ahead of the election and against Trump’s Supreme Court pick.

Here’s downtown D.C. looking east with the Capitol in the distance. Quite a few people taking to the streets. pic.twitter.com/avdarKRseJ

Rachel O’Leary Carmona, executive director of the Women’s March, opened the event by asking people to keep their distance from one another, saying that the only superspreader event would be the recent one at the White House. While most wore masks, the crowd made it hard to stay socially distant.

Carmona spoke about the power of women to end Trump’s presidency.

“His presidency began with women marching and now it’s going to end with woman voting. Period,” she said.

“We saw the power when millions of us joined in the streets together the day after Trump’s inauguration,” the event website said.

Organizers said they “need to bring that same power and determination to Oct. 17 to cap off Trump’s presidency just the way it started — with massive, women-led resistance.”

Opposition to President Trump is the main component of the Women’s March ⁦@WTOP⁩ pic.twitter.com/ISbPhqPlGI

“We really should not be bringing in another Supreme Court nominee at this point in time,” said Solomon.

Kathryn Trew of Virginia Beach, Virginia, joined others at a separate rally outside the U.S. Supreme Court in support of Barrett.

Dee Wright traveled from Chicago for the march to demonstrate for racial justice.

Posters at the march included slogans such as: “This is my resisting bitch face,” “Dump Trump,” and “I am so tired of men.”

The march began at a packed Freedom Plaza in Northwest D.C., then set out down Pennsylvania Avenue Northwest, and looped around the Capitol Building and end up on the National Mall, where the text banking will be held.

At one point, close to the Supreme Court, across the street from the Capitol, the marchers were met by anti-abortion activists.

In one of several speeches at the rally, Sonja Spoo, director of reproductive rights campaigns at Ultraviolet, said she has to chuckle when she hears reporters ask Trump whether he will accept a peaceful transfer of power if he loses his reelection bid.

“When we vote him out, come Nov. 3, there is no choice,” said Spoo. “Donald Trump will not get to choose whether he stays in power.”

“That is not his power, that is our power. … We are the hell and high water,” she said.

March organizers prohibited participants from the 30 states on the self-quarantine list, such as Florida, North Carolina and Texas. Hand-sanitizer stations were seen throughout the march.

D.C. police began closing streets early in the morning but a number reopened as the march passed after 2 p.m. Below is a full list of closures.

The following streets were posted as Emergency No Parking from about 6
a.m. to 6 p.m. Saturday: