An organizer with the Women's March on Washington said they did not anticipate such a huge crowd, despite intense planning.
Listen now to WTOP News WTOP.com | Alexa | Google Home | WTOP App | 103.5 FM

WASHINGTON — Women’s March on Washington organizers say they were caught off guard by the huge turnout on Saturday.

According to city estimates, the event attracted more than 500,000 people. The march had to be rerouted because crowds packed the entire path of the original march.

But Janaye Ingram, one of the event’s organizers, said that despite planning ahead as best they could, they did not anticipate such a huge crowd.

“That was something we didn’t plan for,” Ingram said. “But it was part of the amazing experience and exceeded expectations.”

The Women’s March on Washington was held the day after President Donald Trump’s inauguration and was intended to send a message, that his stance on women’s rights would be challenged. A rally held at Third Street and Independence Avenue SW prior to the march featured performances, activists and celebrity guest speakers.

Ingram said planning for such an event was not an exact science.

“You never know how many people are going to show up,” she said. “We did our best to capture the number of people who would be there.”

The flow of marchers was like a rising tide on Saturday.

As more and more people arrived, there was not enough space and not enough Jumbotrons and sound systems to accommodate the overflowing crowd. The area was filled with a tightly packed sea of people who could only see right in front of them. Not everyone was able to see and hear the rally speakers.

That inability to see and hear aided to the confusion when it came time for the actual march.

D.C. officials had initially said the march portion of the event was canceled because of the massive crowd, but organizers announced during the rally that the march was still on, though heading on a different route.

This caused confusion for those who were not near a Jumbotron or sound system, because they had no idea what was going on.

Ingram said that organizers had planned on putting up more Jumbotrons, but that they weren’t able to because of restrictions. The restrictions, she said, were due to the work being done to tear down and clean up from Friday’s inauguration.

“There are times when those things don’t go as we planned, [but] don’t necessarily make a huge difference in terms of the experience that people have,” Ingram said.

All in all, she said, “everyone is extremely pleased with how yesterday (Saturday) went.”

“We had marches across the country,” Ingram said. “I think sending the message that we sent that women’s rights are human rights and we’re not going back. We’re going to be intersectional in how we move forward. It’s been an important moment in this country. And we all feel very proud of it.”

She said the march will not be an annual event. 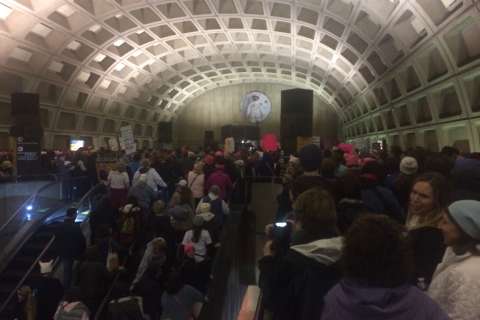 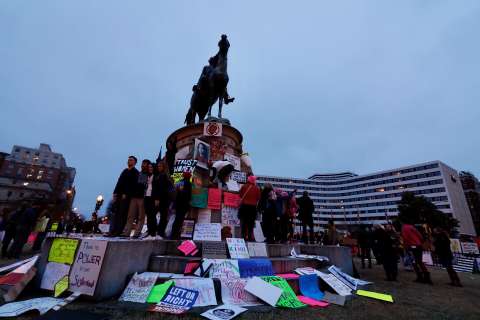