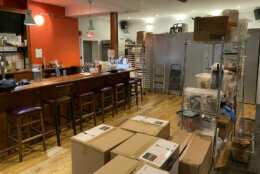 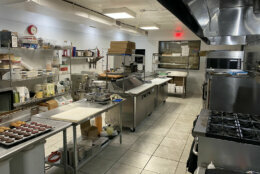 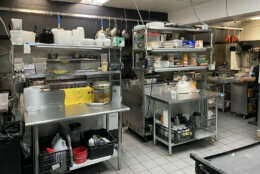 There’s still remnants of the old restaurant and bar that used to occupy this space at 2340 Wisconsin Ave. NW in Glover Park. For one, the bar is still there. But everything else on the inside has changed.

Aaron Gordon thinks it might be a while before things get back to normal, and that it might take even longer before people are comfortable sitting in restaurants the way they used to. His new concept, Ghostline, is his attempt at marrying long-term pessimism with short-term flexibility.

“With COVID, we’ve all seen the writing on the wall,” said Gordon. “Packing into a very tiny restaurant, packing into a very tiny bar, may be a thing of the past entirely. We’re betting … the effects of COVID will be with us definitely for the next year, and very possibly the next two years but frankly, I kind of think it’s going to go way beyond that.”

The renovation reflects Gordon’s belief that people will be more conscientious about crowding into tight spaces.

The concept of Ghostline borrows from food halls and shopping mall food courts. The name itself is a play off a “ghost kitchen,” which is a type of restaurant that doesn’t offer any on-premises seating, like many pizza chains for instance. The restaurant serves craft cocktails, fried chicken, egg sandwiches, pizza, ramen, Indian food, decadent milkshakes and more.

Gordon wasn’t thrilled about likening his restaurant to a mall food court because many mall food courts are not known for serving unique, high-quality food, but he did concede that it has some validity. After all, 75% of Ghostline’s business comes from carryout and delivery orders.

What sets him a part from places that serve mall bites, however, is the food.

“We have multiple, really wonderful concepts all under the same roof, that come with really top name, best in their business chefs,” said Gordon. “So sort of unlike a food court we’re doing great, great food, but yes, you could say like a food court we have many different items under one roof.”

There’s limited outdoor seating with servers and bartenders at Ghostline. All the chefs work inside next to each other — enough space to do their own thing, but also close enough to help each other out in a pinch.

The servers, dishwashers, delivery drivers and cashiers work with all of them. So, one might be boxing up a box of ramen and pizza while another serves fried chicken, a plate of Indian food and cupcakes.

“When you do the economics on it, one single restaurant takes up 2,000, 3,000, 4,000 square feet,” said executive chef Peter Smith, who added he was all-in on the concept as soon as he heard about it.

“Rents are expensive. That’s a lot of sandwiches, or a lot of plates or a lot of entrees you have to sell. If you have everybody in one place you’re splitting the rent up so you’re helping each other out at the end of the day because it’s hard. The restaurant business is hard, period.

Through the first few weeks of operations, Gordon said about half of their customers have come from Glover Park and surrounding neighborhoods that people can walk from.

But both Gordon and Smith think it’s a concept that can be replicated beyond city neighborhoods that are walkable and thrive in the suburbs, too.

“Chefs sharing the burden, the costs of creating restaurants, relying on takeout and delivery, those are all great innovations,” said Gordon, who also sees it as a way to bring more independent dining options to suburban locales that tend to be more dominated by chain restaurants.