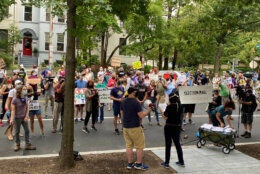 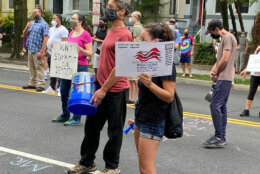 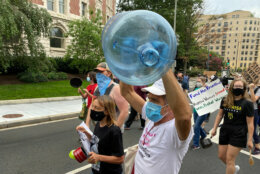 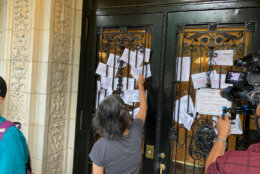 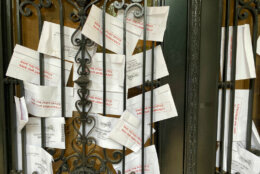 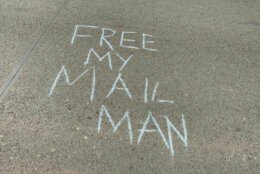 Demonstrators marched to Postmaster General Louis DeJoy’s home in the District on Saturday to protest recent changes at the U.S. Postal Service that are leaving some Americans concerned about the agency’s ability to handle the massive amount of mail-in ballots expected in this year’s presidential election.

The march is underway…. pic.twitter.com/Wh5FXuwqky

Dozens of protesters marched through Northwest D.C.’s Kalorama neighborhood before holding a loud protest in the middle of Connecticut Avenue — right in front of the condo where DeJoy lives.

The noisy morning demonstration — which lasted about an hour — was aimed at sounding an alarm on service cuts and reported slowdowns happening at post offices across the U.S.

Some of the protesters banged on empty buckets, plus pots and pans, while other protesters blasted air horns and sirens.

Almost all of the demonstrators chanted and sang protest-themed songs to express their concerns over the changes taking place at the U.S. Postal Service.

Changes that demonstrators fear will result in suppressing votes in the presidential election on Nov. 3, where absentee and mail-in voting is expected to see a significant rise due to the coronavirus pandemic.

“Forty percent of Americans plan on casting their votes by mail this year,” said Patrick Young, one of the demonstration’s organizers.

“We need to make sure that those votes get to elections officials on time.”

Other protesters expressed similar worries over the U.S. Postal Service being manipulated for political reasons.

“I think a lot of it is about suppressing votes,” said a protester named Margot, who lives in Maryland.

“The postal service is an essential service of our country — not only in the midst of this pandemic to deliver ballots to people and make sure our elections function as they should, but also to deliver medicine, to deliver paperwork.”

A D.C. man who gave his name as “K.C.” said the mail “is a fundamental thing that everybody has in this country … This is one more tool that they’re trying to use in a systematic method to try and weaken democracy.”

The demonstration was organized by Shut Down DC and was one of multiple protests planned for D.C. this weekend. The event was called “Wake Up Louis! We’re Delivering Democracy.”

At one point some of the protesters took mock absentee ballots — which were all blank inside — and stuck them to the front door of the building where DeJoy’s condo is located.

“Save the post office, save our democracy” was stamped on each ballot.

Q&A: What’s happening at the US Postal Service, and why?

The U.S. Postal Service warned states coast to coast that it cannot guarantee all ballots cast by mail for November’s election will arrive in time.

On the National Association of Letter Carriers, which represents 300,000 current and retired workers, said Thursday it endorsed Democrat Joe Biden for president, a move that comes as President Donald Trump has acknowledged starving the postal service of money in order to make it more difficult to vote by mail in November’s election.

On Friday, 31 Democratic senators took aim at new Postmaster General DeJoy, a GOP fundraiser who took the job in June and has since imposed several operational changes that have led to mail backlogs across the nation.

The senators said they’ve heard from hundreds of veterans, as well as Department of Veterans Affairs staff, who cited weekslong mail delays, “causing veterans to miss doses of vital medications.”