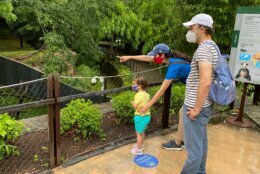 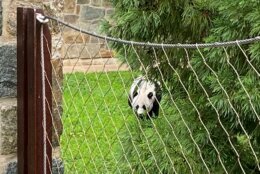 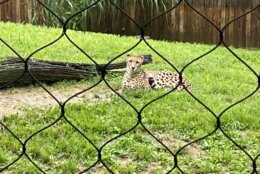 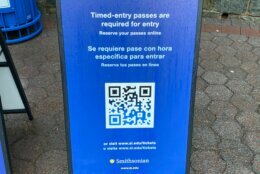 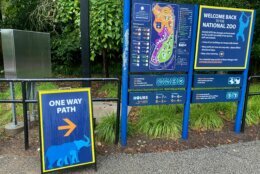 The National Zoo reopened Friday, one of two Smithsonian institutions to begin welcoming visitors again since the COVID-19 pandemic shutdown that began in March. Some things have changed, though.

For one, visitors have to book tickets ahead of time — they’re still free, but they’re for specific time slots.

Steve Montfort, the director of the National Zoo, said the zoo’s new maximum is 5,000 visitors a day, “and they’re spread out.”

Some of the paths around the exhibits are one-way only.

“That’s the other part about staying safe is creating one-way walks through the parks, to create lots of social distancing,” Montfort said.

He added, “Everyone will be required to wear a mask.”

Some indoor exhibits are still closed because their layout and design aren’t conducive to social distancing.

In the men’s room, every other urinal is blocked off, as is every other sink and hand dryer.

None of that stopped guests from arriving by 8 a.m. on the dot.

Greg and Lucy Entwhistle, of Chevy Chase, Maryland, were among the first to show up when the gates opened, having booked their 8 a.m. time slot as soon as it became available online.

“We want to get out of the house and we appreciate our free zoo,” said Greg Entwhistle, who added that he and his wife both took off from work to come back. “It’s a good way to get outside and walk around in one of the most socially distant parks in all of D.C.”

“We come to the zoo all the time normally,” said Lucy Entwhistle. “So, we’re excited just to go back and see animals, and see what’s going on.”

“The animals are unconcerned with COVID and what’s going on in the world,” said Assistant Director Brandie Smith, who is in charge of animal care. “The animals definitely noticed we were gone. I don’t know if they missed us or not.”

But she and Bryan Amaral, a senior curator, agree the animals will show some interest in the return of people, at least at the very beginning. But, not necessarily because they missed us, Amaral said.

“The biggest thing is that the only people that they’ve seen up to this point have been their caretakers,” he said. “So, generally speaking, when somebody comes to their spaces these days, it’s to interact with them in some sort of fashion, whether it’s a different shift in the building or whether it’s to be provided enrichment or something like that.”

But, he thinks that will change pretty quickly for most animals, “which is really to me the good news — there’s no real major change with folks here or not here, which is exactly what we want.”