Protesters again gathered at Black Lives Matter Plaza in D.C. on Wednesday, despite fencing and a line of guards placed at Lafayette Square.

The crowds chanted, and some participants stood on concrete barricades, raising fists toward the White House located nearby.

A police line is keeping protesters from the square.

In addition, fencing surrounds St. John’s Episcopal Church, the area that protesters had dubbed Black House Autonomous Zone. Protesters had set up tents there and along H Street NW, which led to a skirmish with police when it was cleared earlier this week.

CNN reported the D.C. National Guard will provide unarmed guard members to assist with additional security for monuments in D.C.

This week, protesters have called attention to the Emancipation Memorial at Lincoln Park in Capitol Hill, asking for the statue depicting Abraham Lincoln standing over a freed slave to be removed. Protesters also tried to take down a statue of President Andrew Jackson in Lafayette Park.

And last week, protesters toppled a statue of Confederate Gen. Albert Pike that was in Judiciary Square.

One group of protesters, some on bicycles, splintered off to head toward Capitol Hill, with police behind them. Police are helping direct traffic, blocking off intersections to let the protesters cross, WTOP’s Ken Duffy reported from the scene.

Marchers stopped on Pennsylvania Avenue Southeast, before continuing through the Capitol Hill neighborhood. 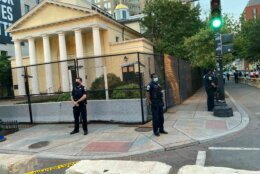 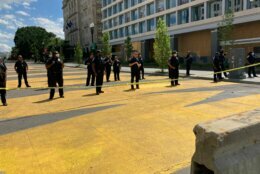 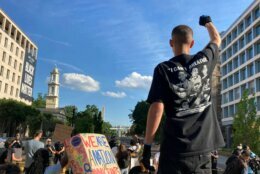 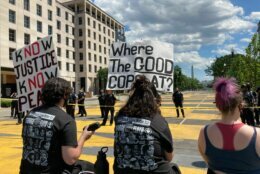