D.C. police said that it appeared protesters Monday were trying to take down a statue of Andrew Jackson in a park near the White House. Here's the latest.
Listen now to WTOP News WTOP.com | Alexa | Google Home | WTOP App | 103.5 FM

D.C. police said that it appeared protesters Monday were trying to take down a statue of Andrew Jackson in a park near the White House.

D.C. police and U.S. Park Police moved demonstrators back from Lafayette Square Park, as protesters told NBC Washington that they wanted to tear the statue down.

The statue shows Jackson in a military uniform, riding a horse that is rearing on its hind legs, the Associated Press reported.

The 19th century president’s ruthless treatment of Native Americans has made his statue a target of demonstrators protesting the United States’ legacy of racial injustice.

The Jackson statue remained on its pedestal Monday night.

A line of law enforcement was formed to try to stop the protesters from gaining access to the statue, NBC Washington’s Shomari Stone told WTOP. Earlier, he said some protesters put ropes around the statue in an attempt to pull it down.

Just before midnight, law enforcement and protesters were in a standoff as protesters assembled a makeshift barricade near Lafayette Park.

There was strong police presence in the area to monitor the several hundred protesters.

Secretary of the Interior David L. Bernhardt said in a statement, “Let me be clear: we will not bow to anarchists. Law and order will prevail, and justice will be served.”

The Interior Department also reported that the cannons surrounding the statue were destroyed.

Stone said the protesters were sprayed with something that burned their eyes.

There was also a small fire in front of St. John’s Episcopal Church that was quickly extinguished, and the letters B-H-A-Z, which stands for Black House Autonomous Zone, were written on the pillars of the church, WTOP’s Dan Friedell reported.

President Donald Trump called the attempt to take down the statue and the writing on the church “disgraceful vandalism.” He said in a tweet that it’s 10 years in prison under the Veteran’s Memorial Preservation Act and said, “Beware!” 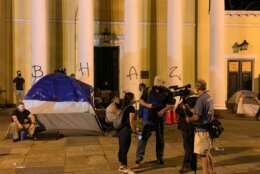 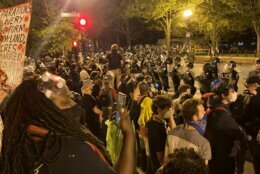 The church had been damaged earlier this month during protests downtown, and it was the church where Trump had his picture taken while holding up a Bible, after law enforcement cleared the area of protesters on June 1.

Earlier Monday, four officers were injured and two people were placed under arrest after a skirmish erupted in the afternoon around Black Lives Matter Plaza in downtown D.C.

D.C. police said officers were clearing camps that were set up in and around the plaza at 16th and H streets Northwest during the ongoing protests.

Police are unclear about what led to the officers’ injuries.

It’s also unknown for what those two reported arrests were made.

Videos on social media show dozens of D.C. police on bicycles shouting “move back” and moving the crowd up onto the sidewalk.

The area around Lafayette Square has been the site of unrest following the May 25 killing of George Floyd in Minneapolis police custody.