A man is in custody after a car chase through D.C. and Maryland on Monday ended with him firing at pursuing officers and barricading himself in a home, police say.
Listen now to WTOP News WTOP.com | Alexa | Google Home | WTOP App | 103.5 FM

A man is in custody after a car chase through D.C. and Maryland early Monday that ended with him firing at pursuing officers and then barricading himself in a home, police say.

D.C. and Maryland police were pursuing the man on inbound Pennsylvania Avenue, in Southeast D.C. at around 2 a.m. Monday, when he crashed into two other vehicles, including a police cruiser, at the intersection with Alabama Avenue.

The man began firing on officers and then ran into a residence, in the 3900 block of Pennsylvania Avenue, occupied by a family with children, said Jeffery Carroll, an assistant chief with the D.C. police homeland security bureau, in a livestreamed news conference.

The family ran to safety as police formed a perimeter.

A police SWAT team eventually entered the home and took the suspect into custody. He was taken to the hospital with minor injuries related to the gunfight, Carroll said.

Carroll said police later found two firearms: One inside the home and a second inside the car used in the chase.

It’s unclear how or where the car chase began.

Several jurisdictions are investigating the suspect in connection with a series of incidents that occurred across Maryland and D.C. on Sunday and Monday morning, Carroll said.

Pennsylvania Avenue remains closed to all traffic between Shadyside and Alabama avenues for the ongoing police investigation.

For the latest traffic conditions, see WTOP’s traffic page or listen to updates every 10 minutes online or on the air at 103.5 FM. 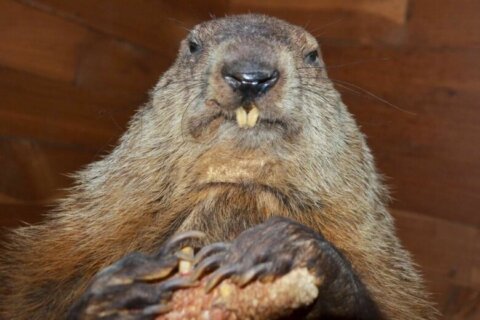