Investigators have pinpointed the causes of two deadly D.C. house fires that happened within nearly a week of each other.
Listen now to WTOP News WTOP.com | Alexa | Google Home | WTOP App | 103.5 FM

Investigators have pinpointed the causes of two deadly D.C. house fires that happened within nearly a week of each other.

A fire Monday night in a duplex on 10th Street in Northeast D.C. started when an extension cord overheated. D.C. Fire and EMS spokesman Vito Maggiolo said the cord was used to plug in a portable heater that should have been plugged directly into a wall outlet.

An elderly woman rescued from the building’s upper floor later died from her injuries. A family member told a D.C. fire official the woman turned 94 in November.

“The lesson here is that portable heaters, in fact any major appliance, needs to be plugged directly into a wall socket,” Maggiolo told WTOP. “You cannot use an extension cord with major appliances, and that is the major lesson that’s to be learned here.”

Last Tuesday, a Feb. 11 blaze at a Southeast D.C. home on Darrington Street also claimed the life of an elderly woman.

Firefighters said she became trapped in a bedroom, and clutter in the home hindered their rescue efforts. Maggiolo said that fire was caused by smoking in bed.

The woman’s husband was able to cover his face with a towel and exit, because the smoke detectors sounded, Maggiolo said.

“(The woman’s husband) was unable to reach his wife, but he was able to safely escape the home,” Maggiolo said. “So smoke detectors do save lives.”

Maggiolo urged anyone regularly in contact with senior citizens to ensure they have working smoke detectors.

If an elderly D.C. resident is unable to afford them for a home they live in and own, they can call 311 and the city will install them, Maggiolo said. 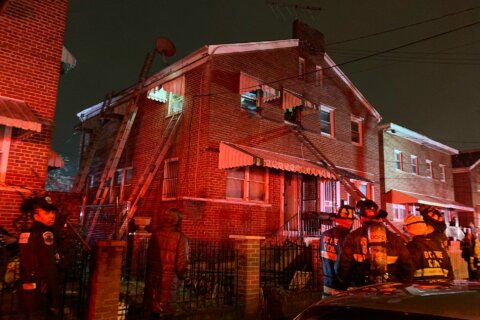