Thousands of women turned out from around the country during the fourth iteration of the Women's March Saturday. This year the march focused on three political issues: immigration, climate change and abortion rights. See photos and video.
Listen now to WTOP News WTOP.com | Alexa | Google Home | WTOP App | 103.5 FM
(1/12) 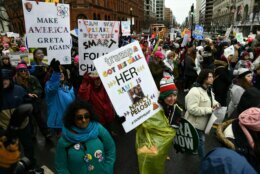 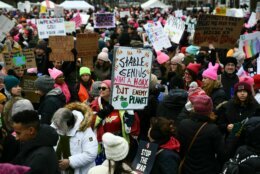 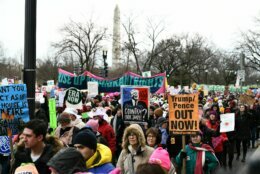 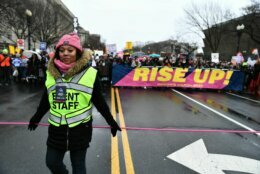 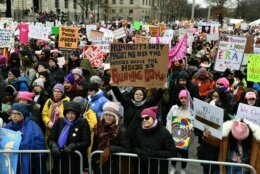 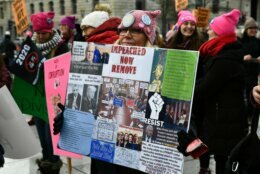 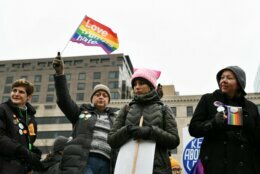 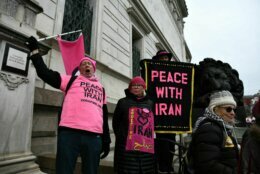 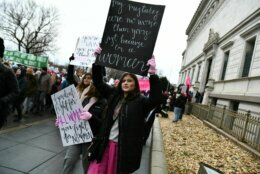 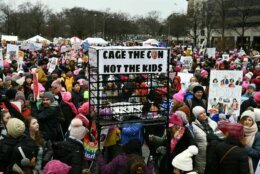 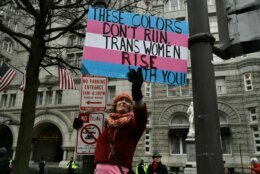 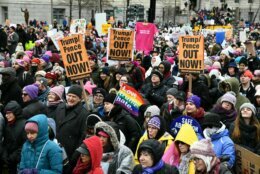 Women turned out from around the country during the fourth iteration of the Women’s March, where thousands marched in downtown D.C. Saturday morning. Though an estimated 10,000 marchers attended it was a steep decrease from the first Women’s March that took place the day after President Donald Trump’s inauguration.

The latest pink-hatted protest opposing the current presidency kicked off at 11 a.m. Saturday.

A dusting of snow and frigid weather in D.C. did not seem to deter protesters as they packed Farragut Square to capacity before the march started.

This year the Women’s March focused on three political issues: immigration, climate change and abortion rights. Some protesters were even seen with a model of a cage with a doll wrapped in a space blanket, reflecting controversy of child detainment at the border of the U.S. and Mexico.

“I teach a lot of immigrant students, and in political times like this I want to make sure I’m using my voice to speak up for them,” Rochelle McGurn, 30, an elementary school teacher from Burlington, Vermont who was in D.C. to march told the Associated Press. “They need to feel like they belong, because they do.”

Pink-hatted women have parked a big cage with a doll wrapped in a space blanket behind the media riser. Seems like a good time to mention immigration is one of their three big issues this year – others being climate and abortion rights.#WomensMarch2020 pic.twitter.com/bIIPzVUy4z

Marchers left embarked for the White House just before noon chanting “Rise up. My body, my choice” and “Rise up. Remove Trump now.”

Organizers were sure to point out that this was the final Women’s March before the 2020 election.

The march begins. It’s big enough to fill a stretch of Constitution Avenue from 17th to 15th streets from edge to edge. That’s easily a few thousand people at least.

Out front, a climate-themed phoenix showing animals rising from the ashes of a burning forest.#WomensMarch2020 pic.twitter.com/SpE6wom49J

The march culminated at around 1:20 p.m. when protesters had a moment of silence followed by 10 minutes of chanting facing the White House, specifically performing “A Rapist in Your Path,” a viral Chilean feminist anthem denouncing violence against women and a patriarchal state. Its creators, Valparaiso-based feminist art collective Las Tesis, led the dance.

Thousands joined the singing in front of President Trump’s residence — though he was out of town. Lyrics relayed messages including, “And the rapist is you. It’s the cops. It’s the judges. It’s the system. It’s the president.”

For their last act, the Women’s March paid a surprise visit to the Trump Hotel for a second performance of A Rapist in Your Path. Again: “The rapist is YOU,” they yelled, fingers pointed at the golden letters bearing Trump’s name above the front doors.#WomensMarch2020 pic.twitter.com/FcUJKj6CoK

“In this struggle, we want to use our bodies and art as an instrument to combat neoliberalism and patriarchy,” a member of Las Tesis said in a news conference at the rally site on Friday, who also remarked that her native Chile “is run by big businesses just like here, another way that we are united in this fight against economic policies that harm women.”

It’s playing out somewhat differently than previous marches, with the Women’s March seeking to streamline its annual event amid shrinking numbers and accusations of anti-Semitism against its former leadership.

“We are not having speakers this year, and we are marching with the marchers because we feel that’s where the energy is with the movement,” O’Leary Carmona said.

See and hear moments from the 2020 Women’s March on Washington.

The closest Metro stations to Freedom Plaza are Metro Center, McPherson Square and Federal Triangle. Expect some overcrowding on platforms near the march. Find out more about weekend Metro station work.

The first Women’s March was held one day after the inauguration of President Donald Trump. That march attracted more than 500,000 people in D.C. in what is thought to be one of the largest single days of protest in U.S. history since the Vietnam War.

“The most important thing that the first Women’s March showed us was the power we truly possessed when we opened space to include the many,” said Lisa Noyola, a transgender Latina activist and deputy director of immigrant rights group Mijente.

“The Women’s March has knitted together a powerful movement of people who share a common belief that freedom is for everyone, with no exception.”

The huge turnout of the original event caught organizers off guard, and the march had to be rerouted due to crowds packing the entire route. Metro reported that more than 1 million trips were taken on the rail system that day.

According to the 2020 permit application, Women’s March organizers were planning for between 3,000 and 10,000 people to turn out on Saturday — a number which, if verified, would continue a dramatic decline in turnout.

Saturday concluded a week of pre-march events including panels and speeches on abortion rights, climate change and immigration — the three issues organizers flagged as paramount to their participants, with a presidential election less than a year away.

While D.C.’s Women’s March was the largest in the country, more than 180 cities planned protests on Saturday as well.

According to the AP hundreds of people gathered at separate events in Manhattan on Saturday at Foley Square and Columbus Circle and converged at Times Square as part of a “Rise and Roar” rally.

In Denver, instead of a rally at the end of their march, organizers invited participants to meet with local organizations to learn more about issues such as reproductive rights, climate change, gun safety and voting. 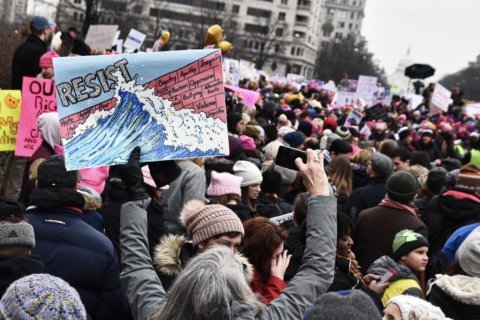