‘Grateful Joe’ who had heart attack meets his lifesavers in DC

The man who posted an anonymous sign thanking the people who rescued him after a heart attack Aug. 12 got to meet the people who helped him.
Listen now to WTOP News WTOP.com | Alexa | Google Home | WTOP App | 103.5 FM

Twin mysteries have been solved Thursday in a case of a man who was brought back from the brink of death after suffering a heart attack while driving in D.C.

In August, someone tied a sign to a tree near the Potomac Avenue Metro station, expressing anonymous gratitude to whoever saved his life after he had a heart attack while driving on Aug. 12.

“My doctor said your quick, immediate, steady CPR action saved me,” the sign read. It was signed “Forever Grateful, Joe.”

D.C. Fire and EMS officials were able to identify the author of the flyer: Joe Cwiklinski, 75, a retired Fairfax County, Virginia, teacher. And the person who administered CPR after Cwiklinski was pulled from his vehicle was “Miss Toni” — Toni Pollard, a medical assistant trained in CPR.

The two met at Engine Company 8 in Southeast D.C. on Thursday morning, where Pollard and the other good Samaritans who responded, along with first responders, were awarded Cardiac Arrest Save Coins, specially minted for those who help patients regain a pulse after a medical emergency.

Cwiklinski admitted to being a bit overwhelmed by the meeting: “Well, I’m a little bit more teary-eyed than I thought I would be,” he said.

Pollard was thrilled, telling Cwiklinski, “Miss Toni saved your life, and Miss Toni has a legacy there — I’m just happy!”

Cwiklinski said he had little recollection of the event that drew residents from Potomac Avenue to his side. He recalled pulling up to an intersection, then, “I passed out. I know nothing after that until I woke up in the hospital.”

So he was unaware that his vehicle had slammed into another at 13th Street and Potomac Avenue, or that Pollard, Alphonso Williams and his wife, Deborah Williams, had come running to the scene.

Pollard said she recalled her CPR training and yelled to those crowded around, “Is everyone all right?” She heard a resounding “No!”

Cwiklinski was in his vehicle, and he wasn’t breathing.

Pollard remembered starting CPR and worrying that she could break one of his ribs or his breastbone.

“I just wanted to make sure,” said Pollard. So she followed the D.C. Fire and EMS crews until Cwiklinski, who had lost his pulse a second time, was loaded into a waiting ambulance.

Alphonso Williams, who goes by Al, said he and his wife came running from their home when they heard the impact of the crash. They helped pull Cwiklinski out of his vehicle so Pollard could start CPR, and then, Williams said, he and Deborah began to pray — hard.

“I feel I witnessed a miracle! That is definitely a miracle — like Lazarus!” he said. 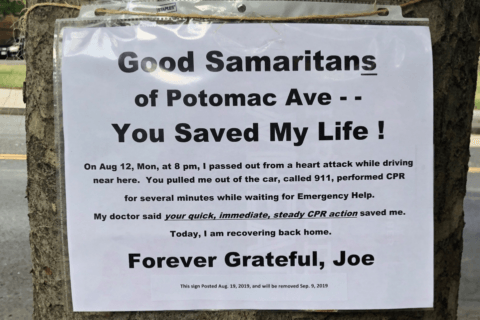 ‘Forever grateful’: Anonymous ‘Joe’ thanks good those who pulled him from car and gave him CPR