A fire broke out in the 1700 block of 7th Street NW around 7 p.m. Wednesday at Sumah's West African Restaurant and Carry Out.
(1/3) 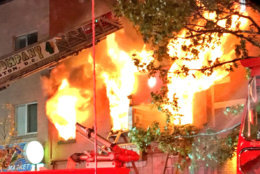 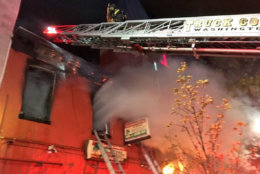 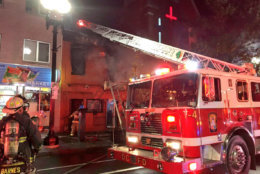 WASHINGTON — D.C. firefighters battled a blaze at a restaurant on a windy and cold Wednesday night.

It happened in the 1700 block of 7th Street NW around 7 p.m. at Sumah’s West African Restaurant and Carry Out.

Scene that greeted #DCsBravest as they swung into action in the 1700 block 7th St NW. Fire under control with no reported injuries. No extension to adjacent structures. Fire also fueled by rooftop propane tanks & gusting winds. pic.twitter.com/QIxdVtzsQb

Firefighters got the fire under control before it spread to other structures. There were no injuries.

D.C. Fire and EMS said the fire was also fueled by a rooftop propane tank and gusting winds.

Gusts of up to 40 mph were recorded on Wednesday at Reagan National Airport, pushing wind chills well below freezing.

The D.C. area was under a wind advisory for much of the day. The National Weather Service lifted it a few hours early at around 2 p.m., but not before the winds had caused scattered power outages.