WASHINGTON – The search is over for the driver of a sedan D.C. police say struck and killed a cyclist in downtown D.C. last month.

Police arrested 20-year-old Phillip Peoples of Suitland, Maryland, on Friday and charged him with second degree murder in the Sept. 24 hit-and-run crash.

A D.C. Superior Court judge ordered Peoples be held without bond. The judge cited evidence that Peoples had driven through a red light at 12th and Constitution Avenue and fled the scene at a high rate of speed, leaving 64-year-old cyclist Thomas Hollowell, of Arlington, Virginia, dying.

While Peoples claimed that he wasn’t the driver of the car that struck Hollowell, the judge found probable cause Peoples was at the wheel and cited a text he said Peoples sent hours after the crash that “complained about having glass all over him.”

The judge also said that Hollowell was atop his bicycle and was properly in the intersection when he was struck.

Prosecutors at the arraignment told the judge that Peoples was convicted of five traffic violations in Maryland since 2016, including two incidents of driving an unregistered vehicle and displaying the wrong tags on a vehicle.

Members of Hollowell’s family, including his wife Carol Regier, were in the courtroom for the arraignment and later declined to comment on the proceedings.

Hollowell, an avid bicyclist, was on his way to work at the Smithsonian National Museum of Natural History when he was killed.

“I know the police have been working very hard and I have a lot of confidence in them, that they got the right person,” Regier said.

After Hollowell’s death, many cyclists came together to honor him with a memorial bike ride and the installation of “ghost bike” at the intersection where he died.

The tragedy also led to renewed calls by cyclists for city leaders to do more to protect people who ride in the nation’s capital. 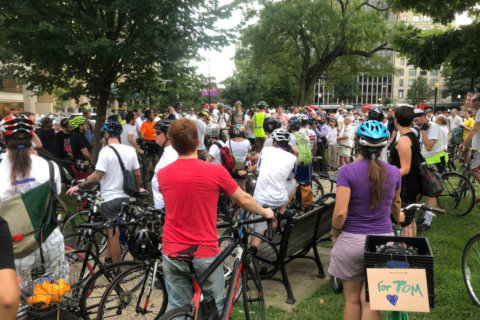