A large group of cyclists, mostly dressed in white, gathered at D.C.'s Farragut Square on Thursday to honor fallen fellow rider Thomas Hollowell, who was killed last week when a driver ran a red light and struck him.

For those who took part, it was a quiet and somber ride through D.C. in memory of the Arlington, Virginia, man and avid cyclist.

“We felt that it is very appropriate for him and for remembering him, in particular,” said Hollowell’s wife, Carol Regier.

Last week, Hollowell was riding to work at the Smithsonian National Museum of Natural History when he was hit by a dark sedan that D.C. police said ran a red light on 12th Street Northwest at Constitution Avenue.

Police are still searching for the driver, who didn’t stop after hitting Hollowell.

Before the ride began, Regier thanked the crowd for coming out to honor her husband, and she told them that he would have appreciated the outpouring of support the family is receiving from the community.

“A lot are friends and family, and we feel it deeply in our hearts that they are here for Tom,” Regier said. 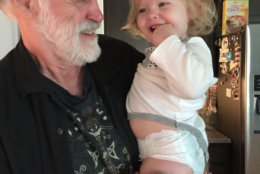 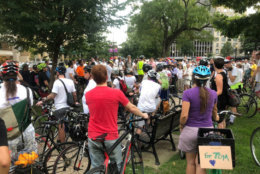 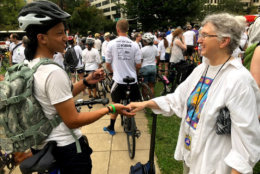 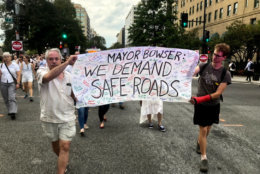 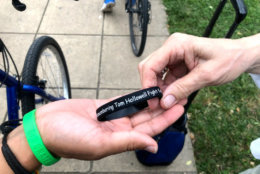 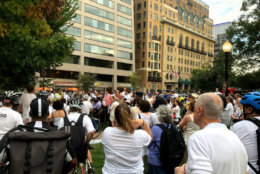 Hollowell was an environmentally-minded cyclist, who rode to and from work for 20 years, Regier said. His daughter, Andrea Hollowell, said only ice would keep him from using his bike.

Andrea Hollowell said the support from fellow cyclists, many of whom are people they have never met, has meant so much to their family. “Without this, we would not be able to cope nearly as well,” she said.

She added that this ride was about bringing attention to safety for cyclists who share the roads with cars in D.C., saying, “This kind of thing shouldn’t be happening and we need to do something, whatever we can, to try and improve the safety on our streets.”

Several organizers were behind the ride, among them Rachel Maisler of the D.C. Bicycle Advisory Council. The goal? “To honor his memory but also to bring attention to the need for safe D.C. roads for all travelers,” Maisler said.

The organizers called for signaled right and left turns on Constitution and Independence avenues, better infrastructure around the National Mall to keep cyclists safe, more speed cameras and longer pedestrian crossing times. They also called on the city auditor to report to them what is being done to prevent similar tragedies.

D.C. cyclist Evan Yeats had his 2-year-old daughter in tow for the ride. “It’s really scary to think of me with a kid on the back of my bike, going through that intersection, and having someone have the total disregard for the lives of the people around them, and see ourselves in those shoes,” Yeats said.

Elizabeth Hunter, of Darnestown, Maryland, said her reason for being a part of the ride is twofold: One, she’s also an avid biker, and two, she is a fellow Smithsonian employee.

“He represented what could happen to any of us,” Hunter said.

After the ride, a white “ghost bike” was installed at the intersection where Thomas Hollowell died.

Regier said she knows what message her husband would have for drivers who share the road with cyclists in D.C. “Slow down — it’s easy. The speed limit is doable,” Regier said.