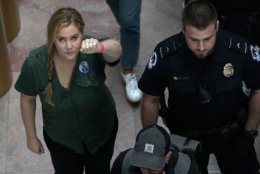 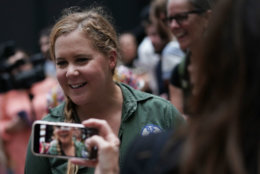 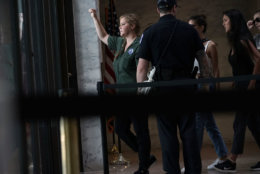 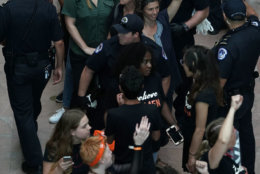 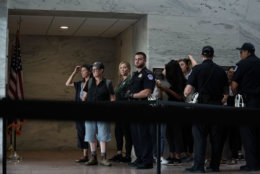 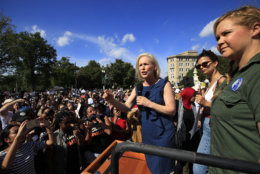 WASHINGTON — Hundreds gathered Thursday at the Hart Senate Office Building to protest against the nomination of Brett Kavanaugh to the Supreme Court.

Comedian Amy Schumer and model and actress Emily Ratajkowski were reportedly among the many arrested during the protest.

Take a look at the scene on Capitol Hill.

MY MOM AND AMY SCHUMER ARE GETTING ARRESTED TOGETHER AND AMY SAID HI TO ME pic.twitter.com/AqZUBUxUrd

.@amyschumer: “A vote for Kavanaugh is a vote saying women don’t matter.” pic.twitter.com/UYKdlMKZ4A

Amy Schumer is one of the many #CancelKavanaugh protesters arrested here in the Hart Senate Office Building just now. #DC pic.twitter.com/Hc2coZP0Qz

Today I was arrested protesting the Supreme Court nomination of Brett Kavanaugh, a man who has been accused by multiple women of sexual assault. Men who hurt women can no longer be placed in positions of power. pic.twitter.com/nnwq1O4qk3

These are all the #CancelKavanaugh demonstrators who have refused to move after police cleared the atrium. Arrests are starting. Women being escorted out with fists up. #DC pic.twitter.com/hn3A2ppMZL

You can’t see her very well, but that’s @amyschumer over by the wall, supporting the protesters. pic.twitter.com/wc4cf7yiGI