Officials said every resident of the senior home is accounted for and that residents have been sent to nearby shelters set up to house them in the interim.
Listen now to WTOP News WTOP.com | Alexa | Google Home | WTOP App | 103.5 FM

WASHINGTON — Firefighters worked for hours to put out the blaze at an apartment building that houses senior citizens in Southeast D.C. after flames first shot up Wednesday afternoon.

At least four people were sent to the hospital with injuries that were not life-threatening, and dozens of residents have been displaced. For those who may have had a loved one displaced by the fire, D.C. Mayor Muriel Bowser said they can call 311 or 202-737-4404 for updates.

The fire has been contained, but firefighters will stay on the scene overnight to tamp down the hot spots and make sure the flames don’t flare up again.

Just before 10 p.m., Bowser tweeted that for the next eight hours, there will be a “fire watch.”

Update: @dcfireems reports the fire has been knocked. A fire watch will be conducted for the next 8 hours. Fire apparatus will remain on the scene.

Around 3:20 p.m., a fire first broke out in the roof level of the apartment building at 900 5th St. in Southeast, said acting fire Chief Milton Douglas at a Wednesday evening news conference. When fire crews reached the fourth floor, they were met with “heavy fire conditions,” he said.

Fire crews were initially working from the inside but were forced to leave the Arthur Capper Senior building and focus on the exterior because of deteriorating conditions. “Units had extensive issues with trying to extinguish the fire due to the heavy volume,” Douglas said. 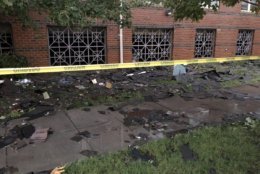 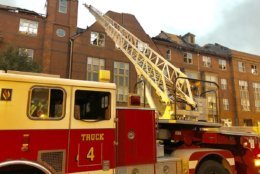 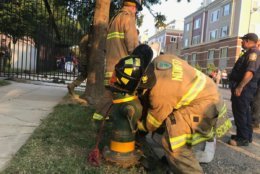 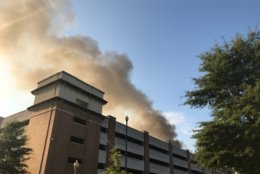 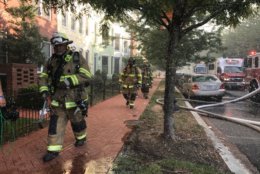 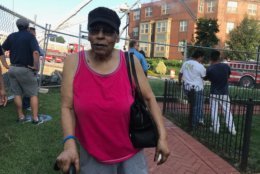 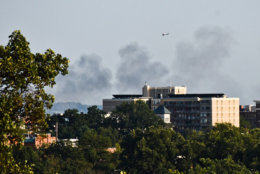 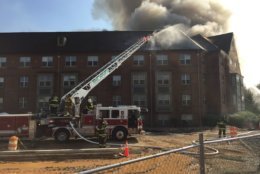 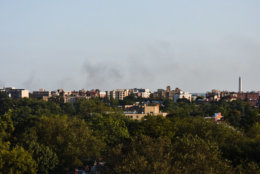 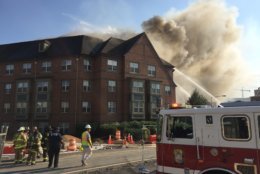 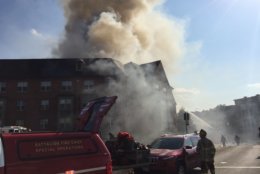 There were also some rescues via ladder, and a Twitter video from D.C. Fire and EMS shows one of the rescues from an upper-story level.

Officials said every resident of the senior home is accounted for and that residents have been sent to nearby shelters set up to house them in the interim. The residents are part of a low-income housing program in D.C.

In a news conference after 11 p.m., Bowser said the building had 162 units, with 161 units occupied. “We believe that everyone has gotten out of the building. The building management has also contacted all tenants, and all tenants have been accounted for,” Bowser said.

D.C. Fire and EMS will go back in Thursday to do another search of the building.

Chris Rodriguez, director of D.C.’s Homeland Security and Emergency Management Agency, said around 87 residents were being cared for by city and other agencies at the King Greenleaf Recreation Center.

“Our plan is to make sure that these residents are cared for but also that they enter into temporary housing as quickly as possible,” likely by Thursday, Rodriguez said.

During the fire, resident A.V. Jones told WTOP that she lives on the second floor of the building and never heard a fire alarm go off. “They didn’t go off. They did not go off,” she said. But, she added that she’s heard fire alarms go off in the building before.

Latoyia Martin, who works as a home health aide in the building, said she did hear banging, but “no alarms went off. No smoke detectors. No sprinklers. And everything usually works. I can honestly say they test that stuff on a regular basis.”

“I went to the door to see what it was. Everybody’s running. They’re saying, ‘The building’s on fire!’ I could smell burning rubber,” Martin said.

She and her 74-year-old grandmother, who is a resident, were just getting ready to eat when the fire broke out. They tried to make their way out of the building from the second floor, with Martin pushing her grandmother in a wheelchair. But then, “smoke just started surrounding us,” Martin said, so they went back to her grandmother’s place where Martin yelled for help from a window.

“The firemen were communicating with me; he told me to take her to the back stairwell. That’s the fastest way we can get her out,” Martin said. She said the back elevators were working and hadn’t been shut off. When Martin brought her grandmother toward the front of the building, she said smoke was everywhere.

Joyce Mutcherson, who lives down the street and witnessed the fire from outside, saw the rescues on ladder and said she didn’t hear a fire alarm.

“I saw the fire spreading,” Mutcherson said. “The roof caved in over here, and it’s caved in here. It was really bad. Dark smoke plumed and the fire was really high.”

When asked about the lack of alarms sounding, Bowser said earlier that she had also heard reports but wouldn’t comment further until fire marshals had a chance to investigate once the fire was put out. She added that the building was privately owned and managed.

D.C. fire Chief Gregory Dean said there will be a followup on the alarm system after the reports. “We’ll get our investigators in there once we get everything stabilized,” he said.

When asked about the sprinkler system, Dean said there were sprinklers in the units and hallways, but it’s not clear if there was a sprinkler system in the cockloft, where the fire was, and that was something investigators would look into.

And, when asked about the building’s possible fire code violations in the past year, Dean said, “This building had been inspected a year ago, and as far as I know, there were not.”

Some of the rescues made by #DCsBravest with the help of neighbors, @DCPoliceDept and others during the early stages of the 5th Street Fire. A shoutout to the @USMC members who also raced to assist in the evacuation. Semper Fi! pic.twitter.com/cgGtJj3buY

Earlier, people could be seen running with wheelchairs toward the building as rescue operations were underway. D.C. Fire and EMS said neighbors, police and a number of U.S. Marines helped with rescue efforts. Fire crews from nearby Maryland also helped fight the blaze.

“All of those hands and strong backs made a difference for the residents here,” Bowser said.

“I’m really proud of the quick action by our neighbors and by the Marines to help care about their neighbors and save lives today,” D.C. Council member Charles Allen said.

In a statement made earlier in the day, Allen said, “We aren’t sure how the fire started at Arthur Capper Senior Building in Navy Yard.”

“Firefighters needed to rescue a few residents via window from the higher floors,” he added.

Allen, who was on-site following the fire alerts, said that when neighbors saw smoke, they ran into the building and started alerting senior residents by knocking on doors.

“When our office got word, our staff started calling to alert residents inside the building. There’s no doubt the alert and fast action of those neighbors and our D.C. Fire and EMS saved lives today,” Allen said.

The Red Cross was also on the scene to provide aid.

WTOP’s Dick Uliano and Megan Cloherty contributed to this report.