From political rallies to cultural events, many are expected to make the District their destination this weekend.

Several of the planned rallies and marches are expected to put groups with starkly different views in proximity to one another, but Newsham expects a peaceful day as thousands of people safely and respectfully express their First Amendment rights, he said.

“If you do come with the intention of breaking the law, unfortunately we will safely and respectfully take you into custody,” he said.

Back in January, Inauguration Day saw rioting blocks from where thousands had gathered to watch the swearing in of President Donald Trump. More than 200 arrests were made during the unrest, but Newsham said those who caused trouble were a small fraction of protesters.

“We didn’t want to do that, but at the end of the day thousands of people came to Washington, D.C. and exercised their First Amendment rights,” Newsham said.

The National Park Service said that more than 30 events are scheduled in D.C. this weekend — not including the H Street Festival and the Race to Beat Cancer 5K, which will also be held on Saturday.

The U.S. Park Police will be on watch along the National Mall, and spokeswoman Anna Rose said police are studying up on the different groups and will be ready to respond if needed.

“As long as they are following the letter of the law, they’ll be allowed to continue their demonstrations,” Rose said.

Like the Park Police, D.C. police have also been researching the groups organizing the rallies, as they do with the many other events that come to town, Newsham said.

One gathering is called the “Mother of all Rallies” and is billed as an event for attendees to “stand united to defend American culture and values.”

Newsham said it’s not clear if supporters of President Donald Trump will attend the rally. Initially, some groups planned counter protests, but have since decided not to come.

“I think as they did their research, they saw what this group is actually representing,” Newsham said.

On the “Mother of all Rallies” website, organizers say that they condemn racism and any form of supremacy. Up to 5,000 people are expected to attend the daylong event on the far side of the Washington Monument.

That rally will coincide with another protest and marches, which involved people wearing clown makeup.

The “Juggalos” are fans loyal to the hip-hop music group the Insane Clown Posse. They plan to protest the FBI’s label that they are a “loosely organized hybrid gang.”

About 3,000 Juggalos are expected to gather at The Lincoln Memorial about noon and march to the Washington Monument for a concert at the Reflecting Pool.

Also Saturday, a “March to Protect Democracy” is set to protest Russian interference in the 2016 presidential election. The participants will gather on Pennsylvania Avenue near the White House and march north on 16th Street toward the Russian ambassador’s residence.

Finally in the same area, the Fiesta D.C. parade which celebrates Latino culture. The annual parade is scheduled from 1 to 5 p.m. along Constitution Avenue NW. 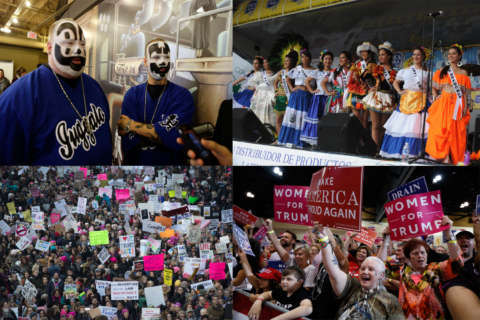