Events around town this weekend could cause some traffic headaches. Here's what you need to know about getting around.
Listen now to WTOP News WTOP.com | Alexa | Google Home | WTOP App | 103.5 FM
(1/13) 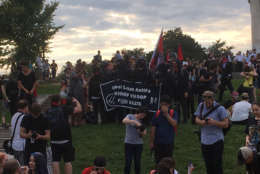 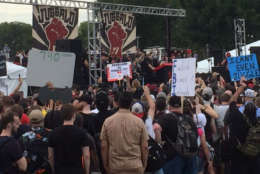 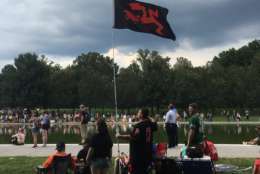 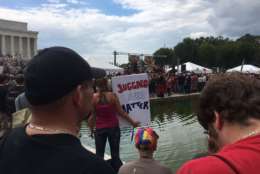 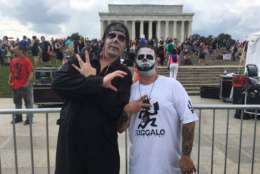 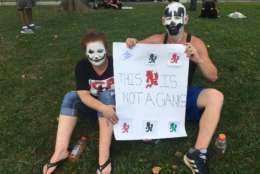 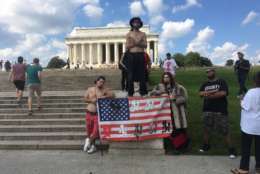 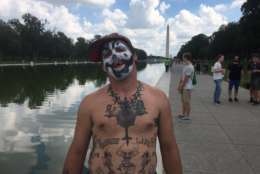 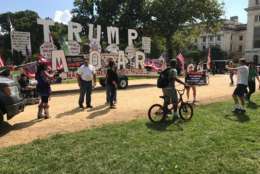 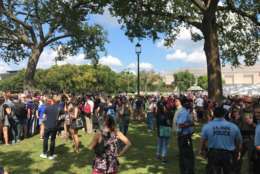 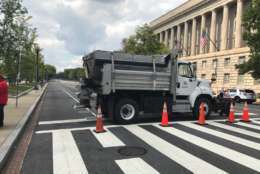 WASHINGTON — A batch of big events including competing marches, a parade, an airshow and festivals are set to make for an interesting weekend across the D.C. region that is sure to also include significant traffic jams. 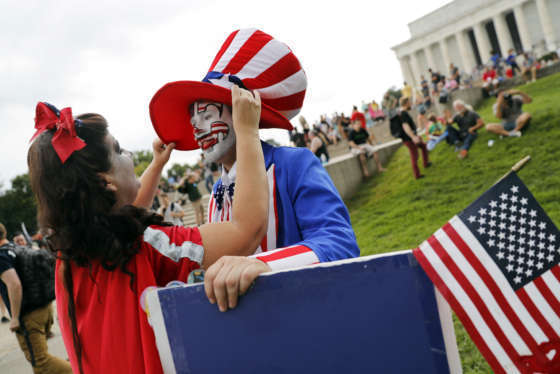 It was an especially event-filled Saturday in D.C. with rallies, a street festival and a 5K race. On the National Mall, different groups converged for their particular causes. See photos.

On Saturday, the “Juggalo March on Washington,” “Mother of All Rallies,” and Fiesta D.C. Latino culture parade all combine around the National Mall.

A National Park Service permit issued to the band Insane Clown Posse’s record label allows so-called “Juggalos” to gather in front of the Lincoln Memorial around noon Saturday, march around the Washington Monument, then return to the Reflecting Pool for a concert from 1:30 p.m. to 4:30 p.m.

The permit says the stated goal of the gathering is “to demonstrate and speak out against the Department of Justice’s labeling of Juggalos (fans of the band) as a gang.”

Organizers expect around 3,000 of the Insane Clown Posse fans, who often wear clown face paint or the group’s symbol of a man running with a hatchet, to attend Saturday’s event.

An FBI report described the group in 2011 as a “loosely organized hybrid gang.”

A website for the “Juggalo March on Washington” describes it as “taking out [sic] fight to the streets. Literally.” The band has disputed the FBI’s characterization and have challenged it in court.

There have been instances where “ICP” disputes have led to serious injuries.

During the march, the permit requires the group to stay on the sidewalks and to avoid blocking traffic. The head of the record label and the label’s director of public relations are listed as the people in charge of the event, which has been planned for more than a year.

Down the Mall on the other side of the Washington Monument, a group of supporters of President Donald Trump are planning a rally — that organizers had been calling the “Mother of All Rallies” — just across the street from the planned path of the Juggalos’ march route.

That group plans to gather on the National Mall east of 14th Street between the Department of Agriculture and Smithsonian National Museum of American History around 11 a.m. to “send a message … we stand united to defend American culture & values,” according to one of the websites linked to the march.

It is not clear how many people will attend, but social media pages tied to the event have several thousand likes or RSVPs.

As with all permits, the Park Service can revoke either of them immediately at any time “should it reasonably appear that the public gathering presents a clear and present danger to the public safety, good order or health.”

An anti-Trump rally, focused on Russian interference in the 2016 election, is also planned for Saturday.

The “March to Protect Democracy” plans to gather on the Pennsylvania Avenue side of the White House around 10 a.m. before marching north on 16th Street to the Russian ambassador’s residence.

Wrapping around those events will be the annual Fiesta D.C. parade celebrating Latino culture. The annual parade is scheduled from 1 p.m. to 5 p.m. along Constitution Avenue NW.

Constitution Avenue is scheduled to be closed from about 11:30 a.m. to 6 p.m. between Ninth Street NW and Pennsylvania Avenue NW

7th Street NW across the National Mall will also be closed.

Near the National Mall, the 2017 National Capital walk to end Hydrocephalus will start from the Sylvan Theater shortly after noon Sunday. Registration is set to begin at 12:30 p.m., and post-walk activities are scheduled to end by 4 p.m.

Also on Sunday, Rock Creek Parkway, Ohio Drive and Independence Avenue west of 14th Street SW will be closed for the Navy-Air Force Half Marathon and Navy 5 Miler.

The first of the 10,000 or so runners are due to start near the Washington Monument just after 7 a.m. Half marathon runners have until 9:45 a.m. to reach the turnaround point on Rock Creek Parkway at Beach Drive/Shoreham Drive in Woodley Park to head back toward the Mall, and must finish the course by 10:45 a.m.

Roads should reopen as runners complete parts of the course.

In addition to the crowds around the National Mall Saturday, the H Street Festival will draw crowds in Northeast D.C.

While the festival officially runs from noon to 7 p.m. Saturday, H Street will be closed from Fourth Street NE to 14th Street NE from early Saturday morning until about 11 p.m. During the closure, D.C. Police and the District Department of Transportation plan some traffic changes in that area on F Street and I Street as well.

Because of the festival, the DC Streetcar will not run Saturday. Service will resume Sunday.

On Saturday morning, parts of the Whitehurst Freeway, the Potomac Freeway between Georgetown and Ohio Drive SW and E Street in Foggy Bottom will be closed from 7:30 a.m. to 10 a.m. for a “Race to Beat Cancer” 5K race.

On Sunday, fans may not want to plan to take Metro home after the game since the rail system now closes at 11 p.m. on Sundays. The last train leaves Navy Yard-Ballpark for Greenbelt at 10:52 p.m. Sundays, while the last train to Branch Ave. is scheduled to depart at 11:18 p.m.

For other events this weekend though, Metro may be the best option. Given the potential for significant crowds for the many events, Metro has relatively limited track work compared to recent weekends.

On Saturday only, the Smithsonian Metro Station will be closed due to security concerns tied to the events, according to an announcement made in the system. Riders can use numerous other stations around the National Mall including Archives, L’Enfant Plaza, Federal Triangle and Gallery Place.

Track work reduces scheduled service to every 15 minutes on each the Green, Yellow, Blue and Silver lines this weekend.

Yellow Line trains are also scheduled to only run between Huntington and Mount Vernon Square rather than all the way to Fort Totten, which reduces service further though.

Orange Line trains are scheduled only every 20 minutes all weekend with single-tracking between Cheverly and New Carrollton.

There is no scheduled weekend work on the Red Line.

The Andrews Air Show, county fairs and other festivals will draw crowds across the area this weekend.

For the air show at Joint Base Andrews, visitors will park for free at FedEx Field to get on a shuttle to the base. The shuttles run to the base from 8 a.m. to 1 p.m. and back to the parking lots until 5 p.m. Saturday and Sunday when the gates close.

Opening ceremonies are scheduled for 10:30 a.m. both Saturday and Sunday, followed by a variety of demonstrations including the Army Golden Knights. The Air Force Thunderbirds are due to fly between 3 p.m. and 4:15 p.m.

While purses, portable lawn chairs and umbrellas are permitted, coolers, backpacks, camelpacks, large camera bags, food and drinks are not allowed through the gates.

On Friday, the demonstration day is for Department of Defense identification card holders only. Friday’s opening ceremonies are at 10 a.m. and parking is available on base for authorized visitors.

The only public transportation option to the air show this year is to take Metro to Morgan Boulevard Station and walk to the shuttle buses at FedEx Field.

Elsewhere in Maryland, there could be extra traffic around U.S. 50 and Interstate 97 in the Crownsville area due to the Anne Arundel County Fair and the ongoing Maryland Renaissance Festival.

Other fairs open this weekend include the Charles County Fair and the Great Frederick Fair. West of Frederick, there are also commemorations this weekend at Antietam National Battlefield of the 155th anniversary of the Civil War battle.

In Virginia, the King Street Art Festival in Alexandria and the Bluemont Fair in Loudoun County could add to traffic in localized areas.

Across the region, there are a series of races for various causes set to either close streets or draw extra crowds, and apple picking and hayride season is picking up, including this weekend’s start of the Cox Farms Fall Festival along Braddock Road in Centreville, Maryland.

In Montgomery County, some bus riders need to be aware of changes that start Sunday.

Ride On is eliminating routes 3, 93 and 94 and combining Route 5, Route 26 and Route 81 for a new “Executive Connector” service.

Route 55’s Sunday service will now extend to Rockville, and schedules are being adjusted on a number of other routes 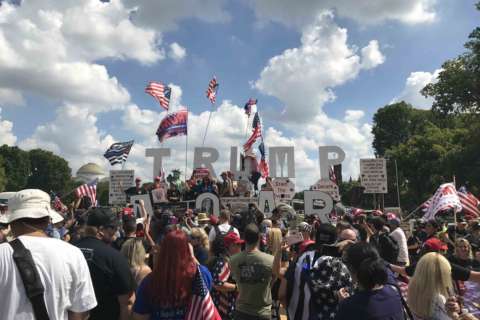